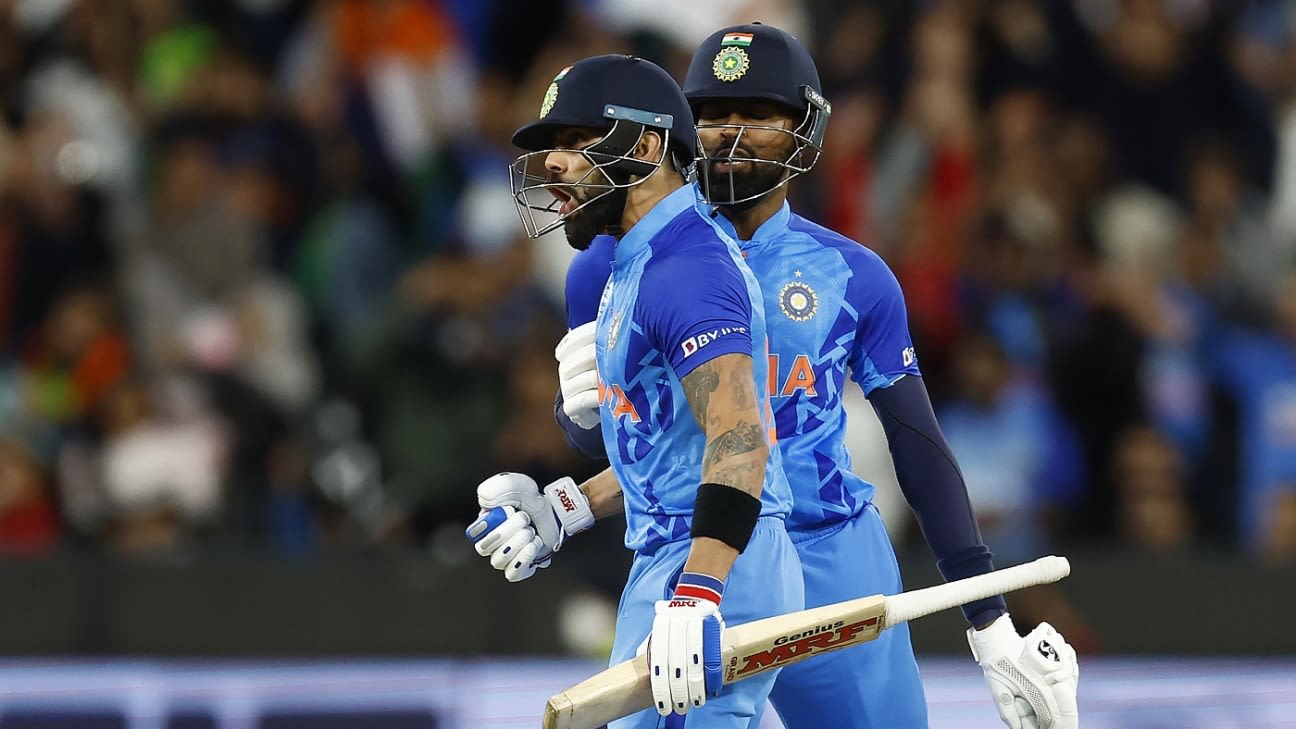 Virat Kohli rates his 82* off 53 in the MCG chase against Pakistan higher than his 82* off 51 in Mohali in a must-win match in the 2016 T20 World Cup against Australia. His captain, Rohit Sharma, though, has gone one step ahead and called Sunday’s innings one of the best for India by anyone, and not just Kohli’s best.
“His best for sure,” Rohit said. “But from the situation we were in – and to come out with a victory – I think it has to be one of India’s best knocks [too], not just his best. Because until the 13th over we were so behind the game, and the required rate was just climbing up and up. But to come out and chase that score was an extremely brilliant effort from Virat, and then obviously Hardik [Pandya] played a role there as well.”
Rohit was asked about the changes he had seen in Kohli during his period of struggle. “Look, I honestly don’t think he was struggling with form or anything,” Rohit said. “He was batting as good as he was. But with him, the expectation is always so high that even if he gets a good 30 or 40, people tend to talk about it.
Related
“From the team-management perspective, I thought he was in a good space right from the Asia Cup, where he got a month off and then came back. He was fresh, got a brilliant hundred there, got a couple of fifties if I’m not wrong, and then leading up to the World Cup, we know the quality that he has, and he’s done so well in these type of conditions in all three forms.
“Obviously, he used his experience today more than anything else, staying calm under pressure, and we know how good he is when the score is in front of him. He’s one of the best chasers in the world.”
Rohit was also pleased with the way his bowlers exploited the early swing and then hit hard lengths with precision. “We spoke of certain things in our team meetings,” he said. “We spoke of how we want to utilise the bigger boundaries and try and challenge the batsmen a little bit.
“You’ve got to sometimes understand what the pitch is doing as well. That back of length, slightly back of length, slightly full, was not easy to hit, and what happened in today’s game will tell you that. A lot of the guys got wickets bowling that back of a length because there was a little bit of grass on the pitch and a bit of weather – quite nippy – as well.

“The first four or five overs was brilliant to watch. For a little while it felt like a Test match because of the way the ball was moving around”
Rohit said of the swing India got with the new ball

“So we knew if you keep hitting that length, it’s going to be challenging, and that is something that we kept constantly putting in the bowlers’ ears, that challenge them: if they hit you a couple of sixes from there, it’s fine. Actually, we got rewarded bowling that length.
“Hardik in particular, bowling that kind of length, and a couple of their batters trying to play cross-batted shots got the top edge, and we got the wickets, and that is something that we spoke of at the start.
“With the way Bhuvi [Bhuvneshwar Kumar] and Arshdeep [Singh] were swinging the ball, our initial plan was to just try and pitch it up, and see if we can get the ball to swing. The first four or five overs was brilliant to watch, honestly. For a little while it felt like a Test match because of the way the ball was moving around, and [because of] the carry in the pitch.”
Tags: ICC Men's T20 World Cup, India, Pakistan vs India, Rohit Sharma, Virat Kohli