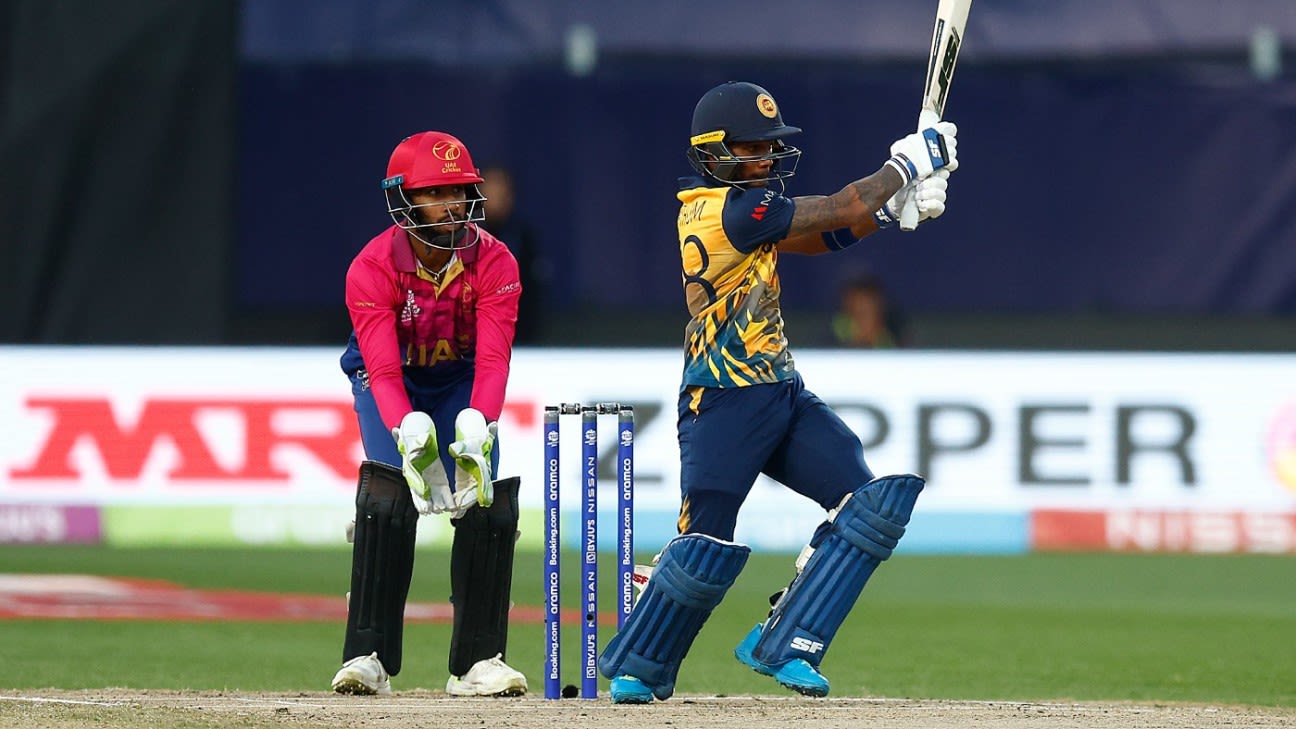 Sri Lanka 152 for 8 (Nissanka 74, Zahoor 2-26) beat UAE 73 (Aayan 19, Chameera 3-15, Hasaranga 3-8, Theekshana 2-15) by 79 runs
Sri Lanka dominated the first 14 overs with the bat, stumbled dramatically against legspinner Karthik Meiyappan, who bagged a hat-trick, and then recovered sufficiently to post 152 for 8. This was thanks largely to Pathum Nissanka’s 74 off 60 balls.
Although Sri Lanka’s was merely a competitive rather than commanding total, their bowlers defended the total zealously, the quicks eviscerating UAE’s top order, before the spinners scythed through the middle. UAE never seemed to have the measure of the chase, going from 21 for 4 to 42 for 7, and eventually 73 all out.
The victory gave Sri Lanka a major run-rate boost (they are now up to +0.6), which could become significant if three teams end up on four points, on Thursday. The loss all but put UAE out of contention for a place in the main draw, as they would need to beat Namibia by a substantial margin on Thursday to enter the main draw.
Sri Lanka’s victory was soured, however, by an injury to fast bowler Dushmantha Chameera, late in the game. Running in to bowl his final delivery of the match, Chameera pulled up lame, and immediately left the field, limping. From his reactions, it appeared as if the injury was more than a niggle.
Karthik Meiyappan’s hat-trick
Karthik had been good in his first two overs, conceding just 14. But in the third, he upended Sri Lanka’s innings. To Bhanuka Rajapaksa, who was desperate to find his first boundary, Karthik bowled it flat and wide, the batter reaching for the ball, hitting over extra cover, and finding the fielder in the deep.
Then came two stunning googlies. The first was to left-hander Charith Asalanka, who prodded forward and sent an outside edge to the keeper. The second to Dasun Shanaka, who did not pick the variation at all, and in his attempt to block the hat-trick ball, left a gap between bat and pad, which Karthik’s delivery wriggled through, to hit the stumps.
Having been 117 for 2, Sri Lanka dived to 117 for 5, then 120 for 6 when Wanindu Hasaranga holed out to long-off.
Nissanka’s slow burn
Nissanka started steadily, hitting three fours to get to 25 off 17 in the powerplay. He was the only batter to hit a boundary off Karthik, in the middle overs, pounding him over cow corner for six (though he top-edged Karthik in the next over, only for the ball to fall in between three fielders).
He reached his half century only off the 45th ball he faced, but was excellent through the late overs, when Sri Lanka desperately needed fireworks. His six over midwicket and four through long-off in the 19th over, off Junaid Siddique, helped inject some energy into a flagging innings. In the end, he holed out off the penultimate ball, having held Sri Lanka’s innings together with his 74 off 64 balls.
UAE’s capitulation
It was essentially a rolling collapse that started in Chameera’s first over (the third of the innings), when he bowled Muhammad Waseem and Aryan Lakra, uprooting three stumps across those two dismissals. He then had captain CP Rizwan caught at mid-off, before Sri Lanka’s other seamer, Pramod Madushan, dismissed Chirag Suri – another stumps-flying dismissal.
UAE were 30 for 4 after seven overs, when Hasaranga imposed himself on the game. He started with a maiden, then had Vriitya Aravind out lbw on review the next over. He claimed two more wickets, while Maheesh Theekshana took two for himself.
Sri Lanka could have wrapped the match up earlier if they had held all their catches, but finished it off with the first ball of the 18th over nonetheless.
Tags: Dushmantha Chameera, ICC Men's T20 World Cup, Karthik Meiyappan, Pathum Nissanka, Sri Lanka, Sri Lanka vs U.A.E., United Arab Emirates, Wanindu Hasaranga de Silva

'Right now I have nothing but praise for Ganguly'

Surrey thrive in the school atmosphere