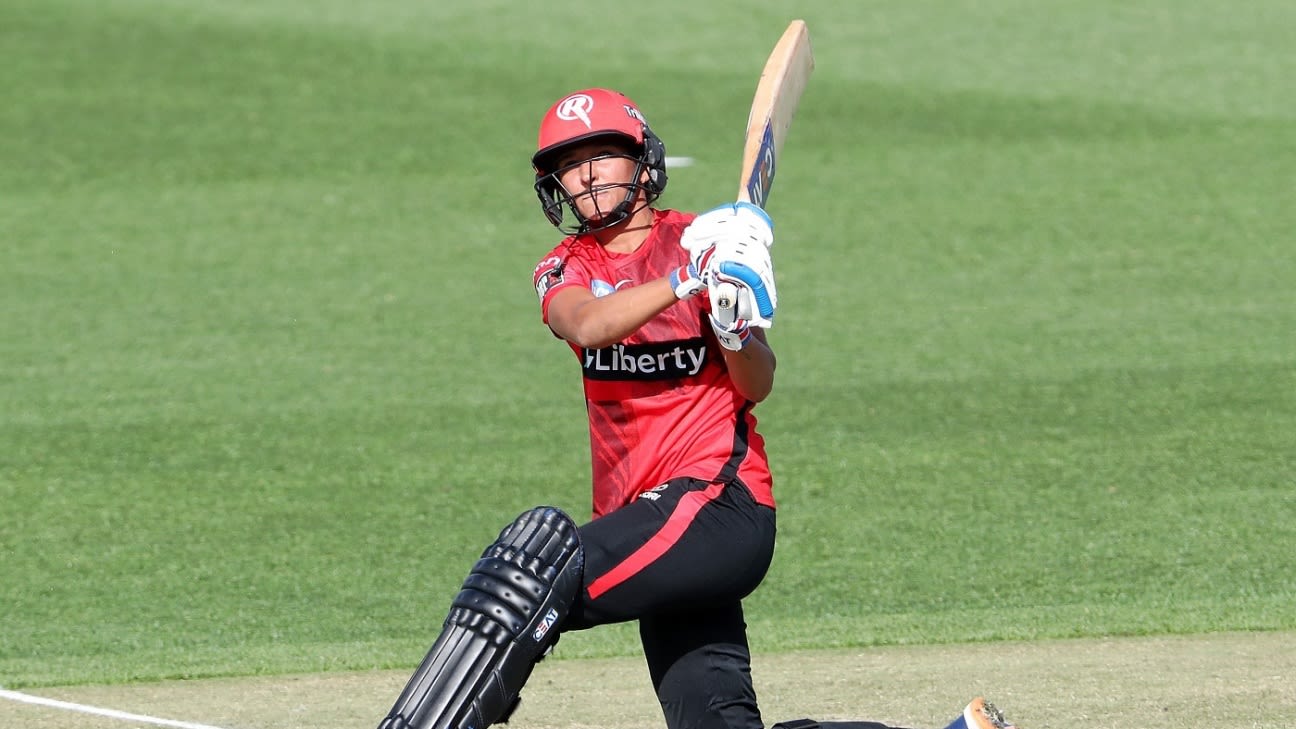 India captain Harmanpreet Kaur will miss Melbourne Renegades opening two WBBL matches in Mackay but coach Simon Helmot is confident last year’s player of the tournament will be available for their third match in Adelaide despite a heavy workload at the Asia Cup.
Harmanpreet will captain India in the women’s Asia Cup final on Saturday in Sylhet just 24 hours before Renegades open their WBBL campaign against Adelaide Strikers in north Queensland.
Workloads have become a major issue for the elite female players this year with Smriti Mandhana withdrawing from the WBBL while Australia captain Meg Lanning is on an indefinite break from the game.
Harmanpreet has played 16 T20Is and six ODIs for India since late June including tours to Sri Lanka, England, which included the Commonwealth Games, and the Asia Cup in Bangladesh. She also played in the ODI World Cup earlier this year in New Zealand during February and March.
Helmot was confident she will be fine to join the Renegades after the Asia Cup final for the full WBBL but he said they would carefully monitor her workloads when she arrives in Australia.
“Obviously, she’s heavy into the Asia Cup at the moment so hopefully as soon as that finishes she can jump on a plane and come and join us up in Mackay or in fact, in Adelaide,” Helmot told ESPNcricinfo. “So that’s when we expect her. I’m expecting her to miss the first two matches, and then we’ll have to check how she’s feeling and how she’s going.
“She’s played a heck of a lot of cricket recently. But having had a few messages over WhatsApp with her in recent times she’s really excited about coming back. She had an awesome time [last season]. She was player of the series and she was such an important player, not just runs but 15 wickets as well, and her support and leadership for Soph [Molineux].”
Related
Workloads have become a major topic of conversation among the senior players in the women’s game with the rise of T20 domestic leagues on top of a burgeoning international schedule that is set to get busier over the coming years under the new women’s Future Tours Programme. A women’s IPL is also set to be launched next year.
The WBBL runs over six weeks and is a full 14-game tournament plus finals. There is more travel involved for all the teams this season than the last two with Covid bubbles and hubs a thing of the past.
Helmot is acutely aware of workload management having spent more than a decade travelling on the men’s international T20 circuit. He has coached in both the IPL and CPL this year alone. He is keen to have the Renegades’ female players take control of their own preparation to ensure they stay physically and mentally fresh.
“I don’t know all the answers,” Helmot said. “But what I do know is that for the Melbourne Renegades, every single training from today onwards is optional. Most of these girls are still going to want to train. In fact, there’s times where I’ll need to suggest or recommend or enforce that they’re not training. And that’s hard.
“Some have had a heavy workload coming into this competition. And so we will be careful in how much we train and what training looks like and the intensity because the most important thing is the 14 matches. I think now the players can make more decisions for themselves.”
Tags: Harmanpreet Kaur, India Women, Melbourne Renegades Women, WBBL