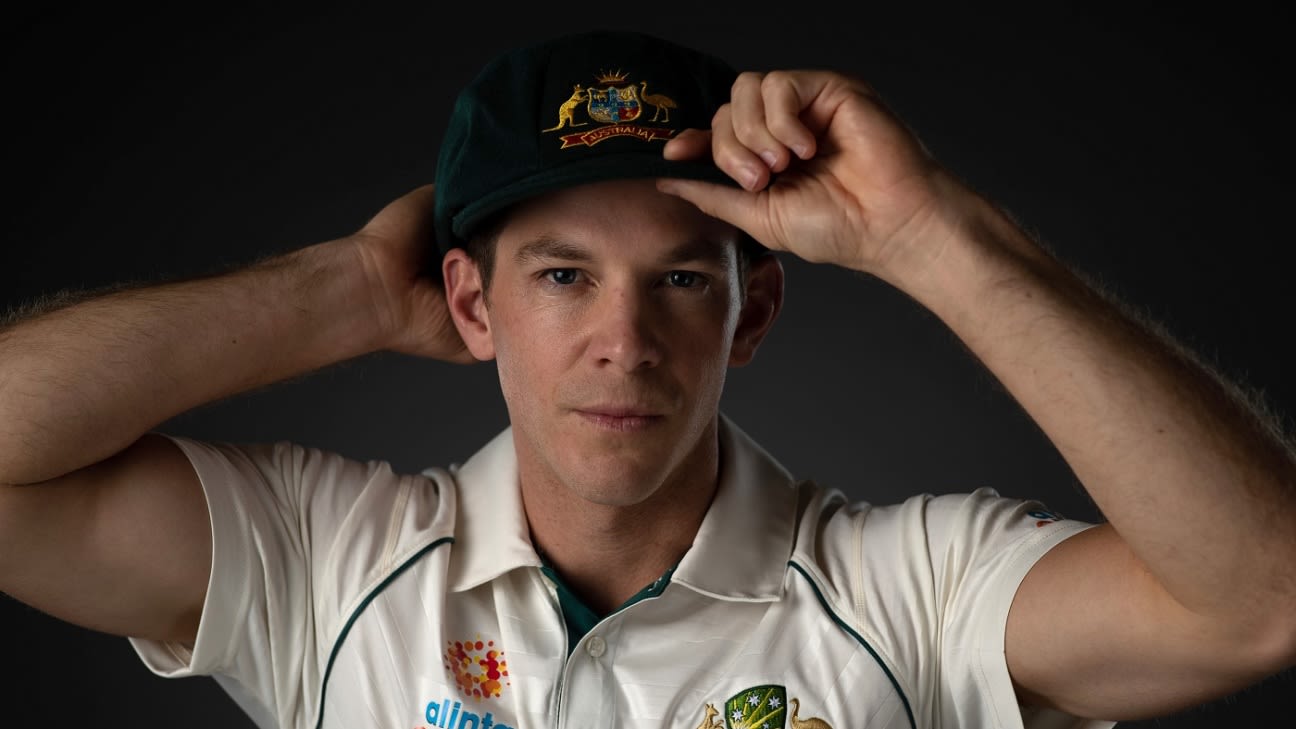 Tim Paine has said he felt “abandoned” by Cricket Australia when the story of an explicit text-message exchange emerged last year and led to him resigning as Test captain shortly before the Ashes.
For the first time, in his autobiography which is out on Tuesday, Paine addresses what effectively became the end of his international career following the emergence of the messages with a female employee of Cricket Tasmania in 2017. At the time, he was investigated and cleared by the CA integrity unit, which found that the messages were consensual and did not breach the code of conduct, but in Tim Paine: The Price Paid, he admits to living with the uncertainty of when the story would emerge, although he says he did not think the fallout would be so dramatic.
Related
He documents how, after CA and his manager James Henderson had failed to stop the publication of the story last November, it became clear during a phone call with CA chief executive Nick Hockley and an unnamed “consultant” from outside the organisation, that the board would not back him to remain as captain.
“The consultant then said that the best way to get ahead of the story was if I stood down as captain,” Paine writes. “I was stunned by that, so was James. Who was this guy? What did he know about the circumstances? That was the first time anyone had mentioned me resigning as captain. There was no way I was doing that. I knew what had happened. Cricket Australia knew what had happened and, in my mind, this guy didn’t know, or worse than that, it was like he believed that I had sexually harassed her.
“Then Nick chimed in, saying how experienced this guy was and how he thought I should listen to his advice.
“I said, ‘Do you want me to resign as Test captain, Nick?’ He couldn’t give me a straight answer, or wouldn’t. He kept talking in circles.
“It was becoming obvious what Cricket Australia wanted me to do but they didn’t have the courage to say it themselves…
“…I hadn’t seen it coming. It was obvious the board wanted me to resign and I had no option if they weren’t going to back me. I felt they were driven by the need to protect their image, they’d got in someone to look after them and he’d decided that I had to be sacrificed to save them, they were hanging me out to dry.”
The morning after the phone call, Paine contacted Hockley and Richard Freudenstein, the interim CA chair, to say he would stand down.
“I was disappointed and I was tired of this. I was prepared to cop the flak for what I did, but in my mind Cricket Australia had abandoned me and made it look like they thought I’d sexually harassed someone and so everyone else would think so too.”

“The reality was they were happy to defend me and accept I hadn’t breached their code of conduct as long as it was kept private. If the story hadn’t run, I would still be captain and if Cricket Australia had handled it like they said they would I would still be playing for Australia”

Shortly after Paine stood down, CA held a press conference where Freudenstein said that the CA board of 2021 would have handled the original investigation differently and not endorsed Paine as captain. After standing down, Paine initially remained available for selection for the Ashes but soon withdrew and took a break from the game.
“The reality was they were happy to defend me and accept I hadn’t breached their code of conduct as long as it was kept private,” Paine writes. “If the story hadn’t run, I would still be captain and if Cricket Australia had handled it like they said they would I would still be playing for Australia.”
Work on Paine’s book, which begins and ends with the text messages and the fallout, started before his resignation. It opens with Paine recounting when the messages were originally sent, on the eve of the 2017-18 Ashes after his surprise recall to the team, then when the complaint against him was made shortly after he was named captain following the Newlands ball-tampering saga.
“Over the years I’ve wondered why I did what I did and I don’t want to make any excuses – it was dumb, it was wrong, it was a breach of trust in my wife – but how was I so thoughtless, so self-indulgent? Why would I take such a stupid risk? I think maybe it was just a way of escaping from all the pressure I was under, it wasn’t that I was on a high about getting a second chance at Test cricket, it was a way to escape the reality of that, the stress of it.
Tim Paine’s last Test was against India at the Gabba•Matt Roberts/Getty Images
“I’d have given up that second chance if I could have my time over again.”
Paine has returned to first-class cricket for Tasmania this season with two appearances in the Sheffield Shield.
There is also a chapter dedicated to the ball-tampering on the 2018-19 tour of South Africa although Paine does not implicate anyone else from within the Australia team. He writes that he was “stunned” when the pictures of Cameron Bancroft with a piece of sandpaper were shown on the big screen.
“My heart sank, I was thinking, ‘What the f***?’ A sense of dread came over us all.”
Describing the day in question, he writes: “The ball wasn’t reversing for us and batting was easy. What happened next will be the subject of speculation for the rest of time. There are so many people with so many theories, so much whispering and speculation. I suspect nobody will ever be satisfied they know the full story of how we got to this place. I’m not sure I even understand myself.
“A lot of commentators have said since that everybody has to know what’s going on in a dressing room, but that’s rubbish.”
However, he does call the lifetime leadership ban given to David Warner – which may shortly be overturned – “one of the dumbest things” to come out of controversy. “It is unfair and unwise,” he says.
Tags: Australia, Tasmania, Tim Paine