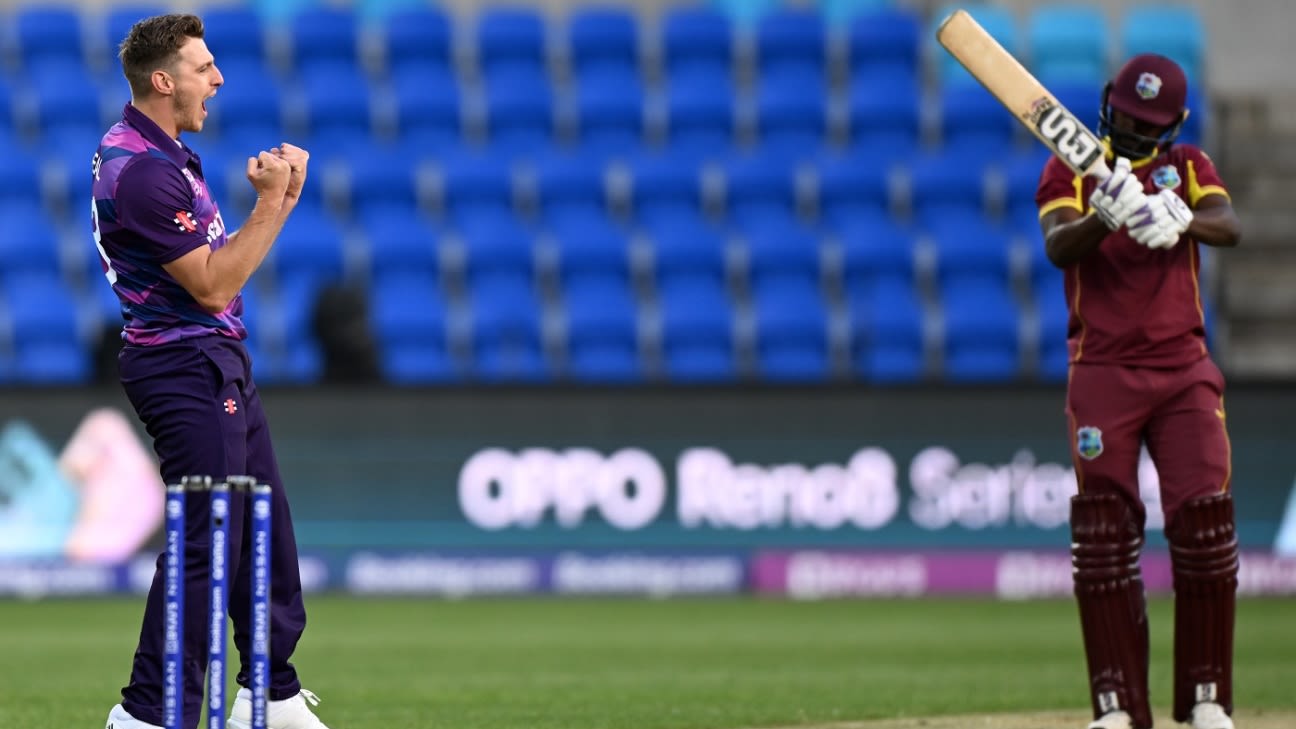 Scotland 160 for 5 (Munsey 66*, Holder 2-14, Joseph 2-28) beat West Indies 118 all out (Holder 38, Watt 3-12, Leask 2-15, Wheal 2-32) by 42 runs
Two-time T20 World Cup champions West Indies were stunned by Scotland in their opening match of Group B in Hobart. With the bat, opener George Munsey scored 66 off 53 to hold Scotland’s innings together to help them post 160. With the ball, Scotland relied on their slower bowlers to rock West Indies to 118 all out and consign them to a 42-run defeat.
It is the second time in two days that a Full-Member side has gone down to an Associate nation, with Namibia beating Sri Lanka on opening day.
West Indies started their chase strongly and were 53 for 1 in 5.4 overs, but then lost their next seven wickets for 26 runs, with left-arm spinner Mark Watt producing a penetrative and economical spell to finish with 3 for 12 in his four overs. Offspinner Michael Leask also put in a stranglehold with the wickets of Nicholas Pooran and Rovman Powell, while right-arm seamer Brad Wheal got crucial breakthroughs at the top and then in his return spell.
The loss puts West Indies under pressure with matches against Ireland and Zimbabwe next on their docket. Scotland, meanwhile, will be looking to build on this comprehensive win and will eye a second consecutive Super 12 spot at the T20 World Cup.
Watt, Leask open West Indies’ wounds
The pitch wasn’t particularly difficult to bat on, and many of West Indies’ key batters fell looking to play their shots in a chase of 161. Kyle Mayers was the first to go, caught at deep midwicket going for a big hit even though he had just slammed a four and a six. Evin Lewis and Brandon King stayed positive through the rest of the powerplay, but Lewis perished after his pull found the only fielder on the leg side boundary.
By now the skies were turning grey. Watt, who opened the bowling, came back after the powerplay. But a sizeable part of his focus – and the captain Richie Berrington’s – was on the DLS sheet. At that point, Scotland were marginally behind, but the tables turned when King was bowled trying to cut Watt off the back foot. With Scotland now slightly ahead of the DLS, it was West Indies who were trying to force the play, and in the process hurt their own game since rain never arrived in the second innings.
Leask, from around the stumps, had Pooran bowled for 5 after he missed a pull shot. Powell soon followed, holing to long-on. And Shamarh Brooks was caught trying to heave a back-of-a-length delivery to the only boundary rider on the leg side to leave West Indies reeling at 77 for 6 after 12 overs.
Brad Wheal had Shamarh Brooks caught•ICC via Getty Images
Akeal Hosein was then run out after a mix-up. Watt induced a nick from Alzarri Joseph for a first-ball duck to bring West Indies down to 79 for 8, and from there on, the result appeared to be a formality.
Jason Holder at No. 7 did save some face for West Indies with his 33-ball 38 to take the team’s total past 100. He was the last man to depart in the 19th over, caught at long-off by Chris Greaves, prompting a sedate and composed celebration from the victorious Scotland side.
Munsey holds Scotland’s fort
Scotland were asked to bat by Pooran at the toss. The West Indies captain said he wanted first use of the moisture on a fresh surface only to then toss the new ball to medium-pacer Mayers and left-arm spinner Hosein.
Munsey and his opening partner Michael Jones took full toll, racing away to a wicketless 52 runs in 5.3 overs before rain stopped play for 45 minutes. Munsey, in particular, took on Mayers and Joseph in the early salvo, using his wrists to pepper the leg side with fours or leaning in to drive through the covers.
However, a combination of a revamped bowling strategy, along with a sluggish post-rain outfield, slowed Scotland down. Holder got the first wicket just after the powerplay and made it two in his next over with Matthew Cross’ scalp. From the other end, Hosein and Joseph recovered from their opening spells with the latter removing Riche Berrington for 16.
The set batter Munsey was struggling to find the boundaries with the field spread out, and Scotland appeared to be losing their momentum, but Calum MacLeod injected some pizzazz with four fours in his 14-ball cameo of 23. At the other end, Munsey slow-burned his way to fifty in 43 balls in the 17th over.
At that time, Scotland looked set for a sub-150 score, a sharp decline from the position they were in after the powerplay.
But they got a timely boost, with two big overs right at the end. The 18th over from Obed McCoy went for 12 runs and the 20th from Odean Smith cost 15 allowing them to post what turned out to be a more than match-winning total. Munsey contributed three of the five fours Scotland hit in those 12 balls, making what was comfortably the highest score of the match and even picking up an award for it.
Tags: Brad Wheal, George Munsey, ICC Men's T20 World Cup, Mark Watt, Michael Leask, Scotland, Scotland vs West Indies, West Indies