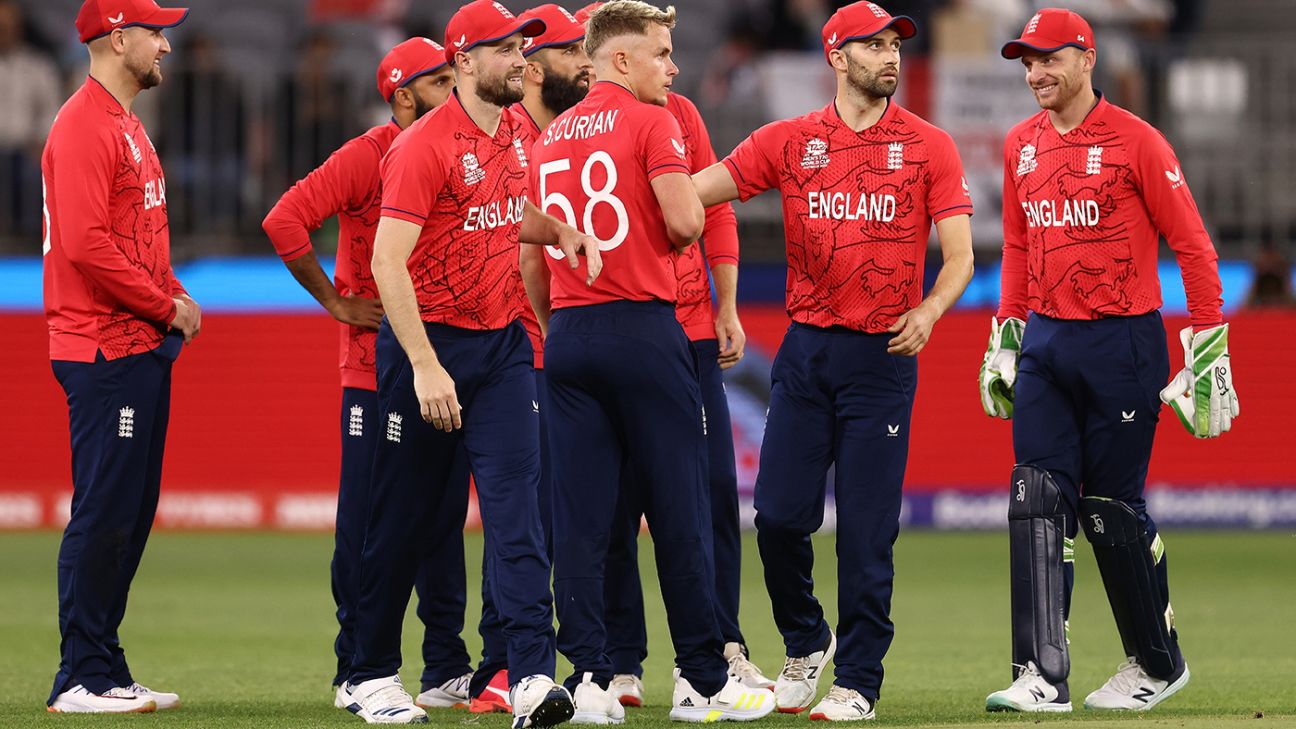 This T20 World Cup has already produced some notable twists and turns, from Logan van Beek’s snake-hipped celebrations as Netherland qualified for the Super 12s to India’s thrilling victory over Pakistan at a fever-pitched MCG, an early exit for two-time winners West Indies and New Zealand’s dismantling of defending champions Australia. But it is hard to see England vs Ireland venturing too far off-piste.
England wobbled in their opening match against Afghanistan, where they were 65 for 3 in the 11th over chasing just 113 before winning by five wickets, a victory built largely on Sam Curran’s brilliant death bowling as he claimed 5 for 10 in 3.4 overs. Ireland, who successfully navigated the first round for just the second time in their history by knocking West Indies out with a convincing nine-wicket victory, dropped their first Super 12s match by the same margin when they were outplayed by Sri Lanka.
England will want to address a misfire after their top four all failed to reach 20 against Afghanistan and the team managed just seven boundaries in all off the bat, including three in five balls to No. 5 Liam Livingstone. But seamers Mark Wood and Chris Woakes made continued good progress along their respective injury comeback trails to bolster Curran’s diamond run. Ireland opener Paul Stirling looks in decent touch with an unbeaten 66 against West Indies and 34 from 25 balls as his team’s second-highest scorer behind Harry Tector’s 45 against Sri Lanka, but both will need more against England.
These sides have only faced off once in T20Is, when their match at the 2010 ICC World Twenty20 in Guyana was washed out in the fourth over of Ireland’s run-chase with eventual champions England attempting to defend a meagre 120 for 8 and avoid bowing out in the first round. Ireland have beaten them twice in ODIs, however, including at the 2011 World Cup in India but, in winning 4-3 in Pakistan and beating Australia 2-0 (their final game was rained off) immediately before this tournament, England remain favourites.

Alex Hales has a prime opportunity to rediscover the form on Australian soil that was key to his recall for England after three years on the outer. His return started brightly with a half-century against Pakistan in Karachi last month, his first international match since March 2019. Upon reaching Australian shores again, where he had amassed 11 fifties and a ton in 45 matches for Sydney Thunder during that time in the Big Bash League, Hales scored 84 in the first of three matches with the hosts.
Since then, however, he has posted 4, 0, 9 (in the World Cup warm-up against Pakistan in Brisbane) and 19 in England’s tournament opener against Afghanistan. In the 10 T20Is he has played since his international comeback, Hales averages 23.70 with a strike rate of 137.9 and two fifties compared to a career average of 29.85 and strike rate of 136.80 with 10 fifties and a century. Getting back into a rhythm in the next match could spell danger for Ireland – and the sides to follow.
Andy Balbirnie‘s quick-fire 37 off 23 balls against West Indies hinted at the Ireland captain playing a key role in his side’s fortunes at this event. But since a half-century followed by 46 at home to Afghanistan in August, it’s his only innings of note.
Four single-figure scores, including 1 against Sri Lanka, during a stretch where he has otherwise failed to pass 15 could pique his desire to dig deep for a big innings. With Stirling, Balbirinie can forge a formidable partnership, as England discovered in their 50-over encounter at Southampton in 2020. Reprise that sort of stand and anything can happen.

The poser for England is whether they exercise caution with Mark Wood and Chris Woakes, making their way back from elbow and knee surgery respectively. Woakes, who had been in doubt for the first game because of a thigh problem before taking 1 for 24 from his four overs, said he was hopeful of playing all five Super 12s games. Jos Buttler said on match eve that he was keen to play his strongest available side according to conditions, which would suggest both play. Should they place one or both seamers in cotton wool, England have David Willey and Chris Jordan in the wings, as well as Tymal Mills – a late injury replacement for Reece Topley.
England (probable): 1 Jos Buttler (capt, wk), 2 Alex Hales, 3 Dawid Malan, 4 Ben Stokes, 5 Liam Livingstone, 6 Harry Brook, 7 Moeen Ali, 8 Sam Curran, 9 Chris Woakes/David Willey, 10 Adil Rashid, 11 Mark Wood/Chris Jordan
Ireland have plumped for the same XI for their first four games, including two victories which followed their first-up defeat to Zimbabwe, and may well stick with their line-up. George Dockrell continues to train in isolation from the broader group while experiencing mild symptoms, having played against Sri Lanka after testing positive for Covid-19.
Ireland (probable): 1 Paul Stirling, 2 Andy Balbirnie (capt), 3 Lorcan Tucker (wk), 4 Harry Tector, 5 Curtis Campher, 6 George Dockrell, 7 Gareth Delany, 8 Mark Adair, 9 Simi Singh, 10 Barry McCarthy, 11 Josh Little

Ireland lost five wickets to spin against Sri Lanka in Hobart, but with some vicious pace and bounce on offer from the MCG pitch during that epic India vs Pakistan fixture, Wood’s express speed is a big plus for England. With rain forecast for the afternoon and evening in Melbourne, swing could play a part too, making England the happier side.

“Watching the game here between India and Pakistan, there was certainly some quality bowlers on show but they certainly got some assistance… it’s about seeing what’s in front of us on that day. If the ball is swinging, can we use that to our advantage? If it’s not, can we recognise that quickly and change plans if we have to?”
Jos Buttler on going with the flow.
“It’s making sure that we understand the situation, the conditions, the opposition, use that as a competitive advantage that we know that they know that we know that they know.”
Heinrich Malan, the Ireland coach, on using memories of Bengaluru 2011, or not.
Tags: England, ICC Men's T20 World Cup, Ireland, Ireland vs England