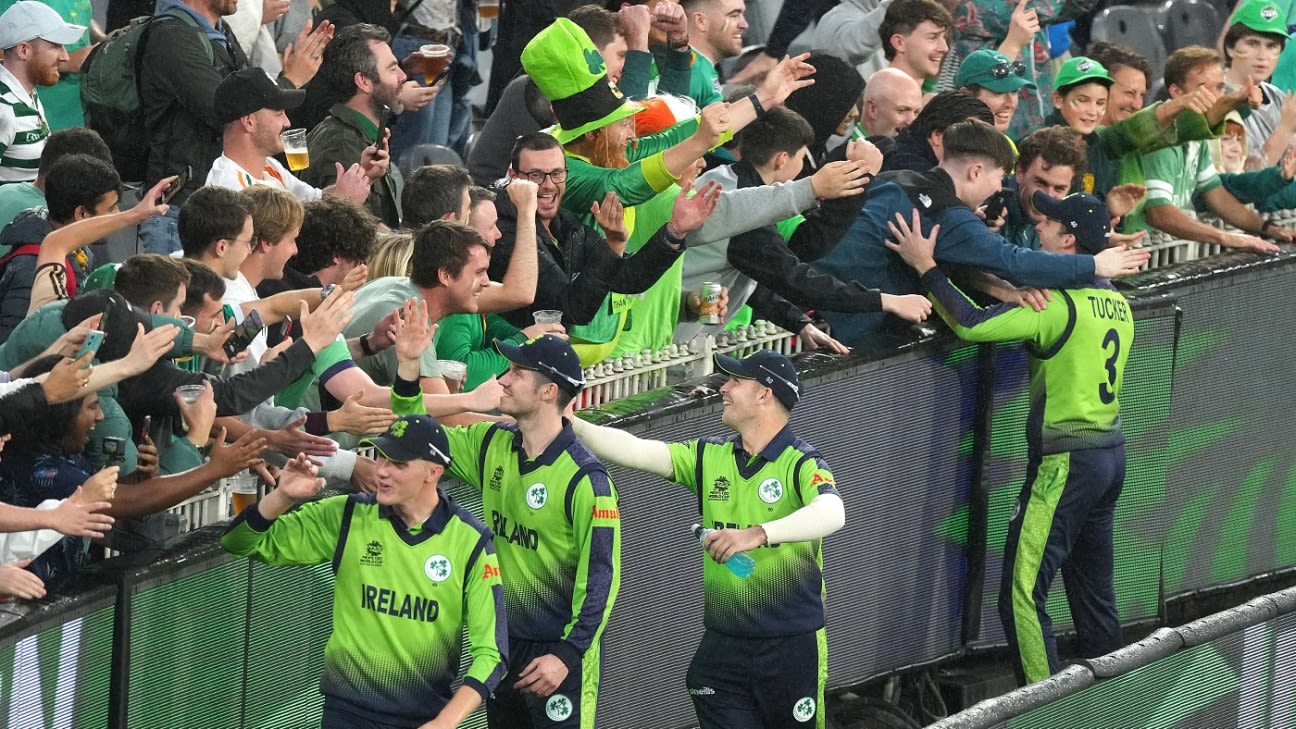 Ireland 157 (Balbirnie 62, Wood 3-34, Livingstone 3-17) beat England 105 for 5 in 14.3 overs (Malan 35, Little 2-16) by five runs on DLS method
Ireland dominated the powerplay with bat and ball either side of a collapse of 7 for 25 to take down England at the MCG, adding another glorious chapter in Irish sport. Eleven years after Kevin O’Brien inspired Ireland to a memorable victory on a steamy day in Bengaluru, Ireland found new heroes on a wet afternoon in Melbourne to stun a more-fancied England side once again at a World Cup.
Josh Little posed a threat to England with the new ball, finding sharp movement and bounce from a fresh MCG pitch. The left-arm quick first had Jos Buttler nicking off and then bounced out Alex Hales. Fionn Hand, who was playing only his third T20I, breached the defences of Ben Stokes to leave England 29 for 3 in the sixth over in their pursuit of 158. Legspinner Gareth Delany hiked England’s asking rate further with his quickish darts.
Though Moeen Ali threated a late fightback, marked by a straight six in the 15th over, England were five runs behind on DLS when rain came down once again. It got heavier soon after and by 6.50pm, the game ended with Ireland’s players celebrating a monumental victory with their fans, family and friends in the rain.
Balbirnie, Tucker make merry
After rain had played hide and seek earlier in the afternoon as well, Paul Stirling and Andy Balbirnie dashed out of the blocks, like they have often done in the recent past.
Stirling smeared Chris Woakes over extra-cover and then spliced Mark Wood’s first ball over the third-man boundary, with Sam Curran’s effort to scoop it back in proving futile. Two balls later, Stirling backed away and tried to repeat the shot, but Wood cranked it up to 150kph, tucked him up, and had him splicing it straight to Curran.
Lorcan Tucker, who is usually strong against spin, then showed that he could cut it against the pace and bounce of Wood and Woakes on a spicy pitch. Tucker closed out the powerplay with a punchy six off Curran, pushing Ireland up to 59 for 1 in six overs.
Balbirnie, who was on 25 off 24 balls at one point, turned up the tempo when he lined up Woakes for two fours and a six in the tenth over. With the seamers leaking runs, Buttler was forced to turn to Liam Livingstone’s all-sorts spin.
Wood’s extra pace, Livingstone’s lack of pace
After Livingstone gave away just five runs off his first over, England broke the 82-run second-wicket partnership when Adil Rashid deflected a straight drive from Balbirnie back onto the stumps at his end in his follow through to catch Tucker short for 34 off 27 balls.
Wood returned to the attack in the next over and ambushed Harry Tector with a 153kph thunderbolt. Wood continued to bowl in the 150-kph range, knocking Curtis Campher and Delany on their helmets.
As for Livingstone, he mixed up his pace well and dared Ireland’s batters to clear the bigger boundaries at the MCG. He had Balbirnie caught at deep square leg in the 16th over and cleaned up George Dockrell next ball to trigger a full-blown collapse. From 132 for 3 in the 16th over, Ireland crashed to 157 all out, leaving four balls unused in their innings.
Little’s big moment
Little started Ireland’s defence in grand fashion by besting Buttler for a duck in the first over. He and Mark Adair bowled much fuller than England’s seamers did with the new ball earlier in the day. After also testing Hales with the fuller length, Little dug one into the pitch and drew a top-edged pull to short fine leg for 7. He went onto handcuff Dawid Malan with his tactful length variations and use of angles.
Little is the new face of Ireland’s attack, having had franchise cricket stints at the Hundred (Manchester Originals), the Lanka Premier League (Dambulla Giants) and even the IPL (net bowler at Chennai Super Kings), and he stepped up against England on the biggest stage of all.
Malan laboured to 35 off 37 balls before McCarthy had him miscuing a pull. Harry Brook managed only five runs off nine balls against Delany before he also holed out, failing to clear the boundary.
Ireland were untidy in the field, dropping two catches off two balls at the start of the 11th over, but their bowling was anything but. Moeen was onto something when he hit three fours and a six in seven (legal) balls, but it wasn’t enough to pull England ahead when the rain returned.
In the 2010 T20 World Cup in the Caribbean, Ireland had given England a scare before rain washed out the game. Nothing could deny Ireland this time.
Tags: Andy Balbirnie, England, Fionn Hand, Gareth Delany, ICC Men's T20 World Cup, Ireland, Ireland vs England, Josh Little, Lorcan Tucker