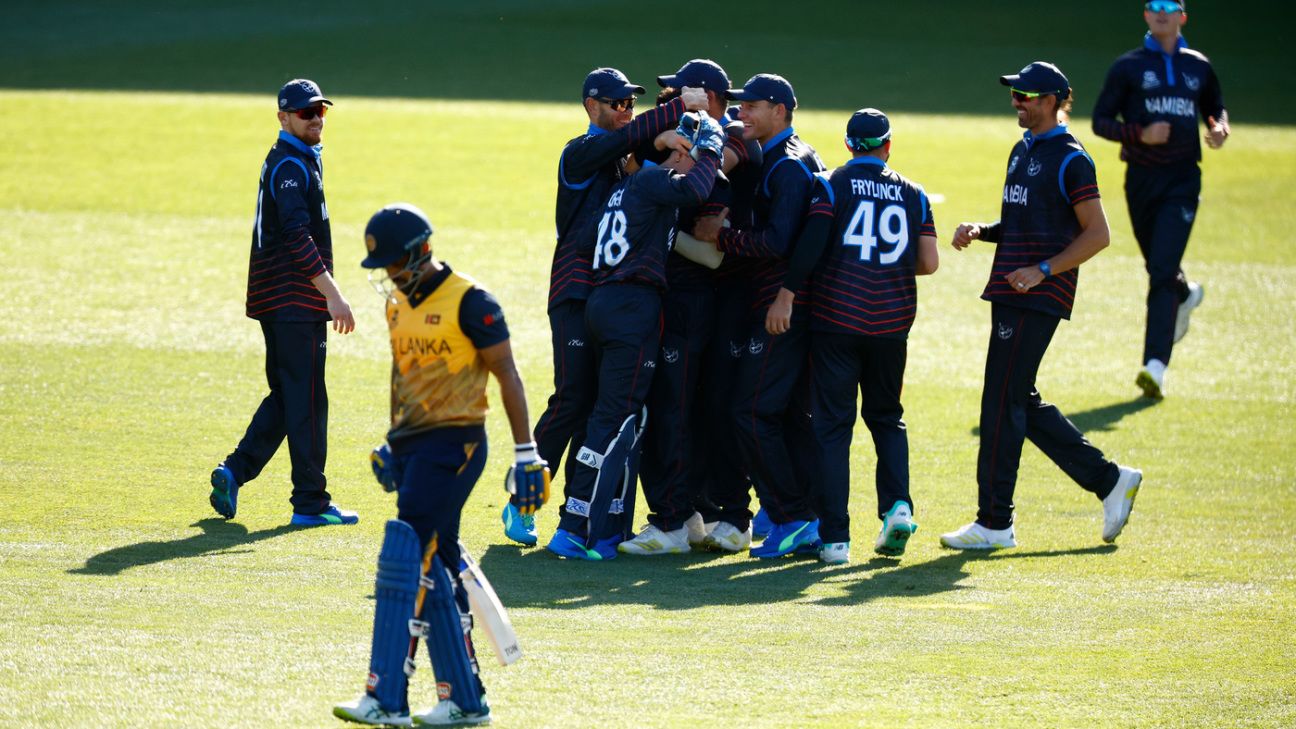 Namibia 163 for 7 (Frylinck 44, Smit 33*, Madushan 2-37) beat Sri Lanka 108 (Shanaka 29, Wiese 2-16, Scholtz 2-18, Shikongo 2-22, Frylinck 2-26) by 55 runs
Jan Frylinck and JJ Smit blasted Namibia out of a desperate situation, then their seamers scythed their way through Sri Lanka’s batting order – Ben Shikongo taking two wickets in two balls inside the powerplay, while David Wiese and Frylinck also made key breakthroughs.
Related
In the end, the match wasn’t even close. Sri Lanka, never having seemed on top of the chase of 164, could not get a partnership going – Bhanuka Rajapaksa and Dasun Shanaka mustering the best of their innings, with 34. Namibia’s bowlers kept mixing up their pace on a slow Geelong surface that rewarded pace off the ball. Sri Lanka’s batters kept holing out. They were eventually all out for 108 at the end of the 19th over.
Namibia, meanwhile, had pulled off perhaps the biggest upset in the history of their men’s side. In the last T20 World Cup, they’d beaten Full Member Ireland to make it into the main draw. This time, they’ve taken down the freshly-crowned Asia Cup champions, and a side that had won their last five successive T20Is.
Frylinck and Smit blaze their way through the death
If you’re looking for a turning point in the match, this is it. Namibia were 93 for 6 with 34 balls remaining in the innings. They seemed headed for a total of less than 140, given how quickly wickets were falling, and that their most reputed batters were already out.
But this is when Frylinck and Smit put on a spectacular seventh-wicket stand. In the 16th over, Frylick blasted Dushmantha Chameera square on the legside for four to begin their salvo. Next over, Smit walloped Wanindu Hasaranga over deep midwicket. The runs came quickly after that – Smit hitting another six over deep midwicket, as Frylinck motored to 44 off 28, and he to an arguably even more impressive 31 not out off 16.
Together, they had reaped 70 runs off the last 34 balls, and made their total competitive.
Sri Lanka falter in the powerplay
Sri Lanka’s openers had been crucial in their Asia Cup campaign, but here Kusal Mendis and Pathum Nissanka could not get out of single figures. Mendis was out first, top-edging a Wiese delivery that he had tried to pull in the second over. Nissanka was the first victim of Shikongo’s double-strike, failing to clear mid-on with a lofted drive. Danushka Gunathilaka nicked the next ball to the wicketkeeper, and Sri Lanka were 21 for 3. Their powerplay brought only 38.
The middle order unravels
The middle order’s collapse was perhaps even more dramatic. Following Shanaka and Rajapaksa’s brief attempt at recovery, the climbing required rate had Sri Lanka’s batters looking for boundaries. They failed abysmally, as Namibia’s bowlers used the slowness of the surface to excellent effect. Between the 10th and 17th overs (42 balls), Sri Lanka lost five wickets, and made 25 runs, hitting zero boundaries. In fact, in the whole batting card, only four batters managed to hit a boundary.
Namibia’s seamers were impressive in this period, but so was left-arm spinner Bernard Scholtz, who took 2 for 18 from his four overs.
Before Namibia turned it around
The first 15 overs of this game had gone as expected, roughly. Sri Lanka fielded well through the first three quarters of their bowling innings – Dhananjaya de Silva taking an especially good running catch at deep square leg at the end of the 14th over. Up to this point, Sri Lanka’s spinners had been incredibly effective, and their quicks were hard to score off – every member of the attack having taken at least one wicket, with Madushan having claimed two.
At the death, the quicks were less impressive.
Tags: Ben Shikongo, ICC Men's T20 World Cup, Jan Frylinck, JJ Smit, Namibia, Namibia vs Sri Lanka, Sri Lanka

Ranatunga resigns as minister for tourism