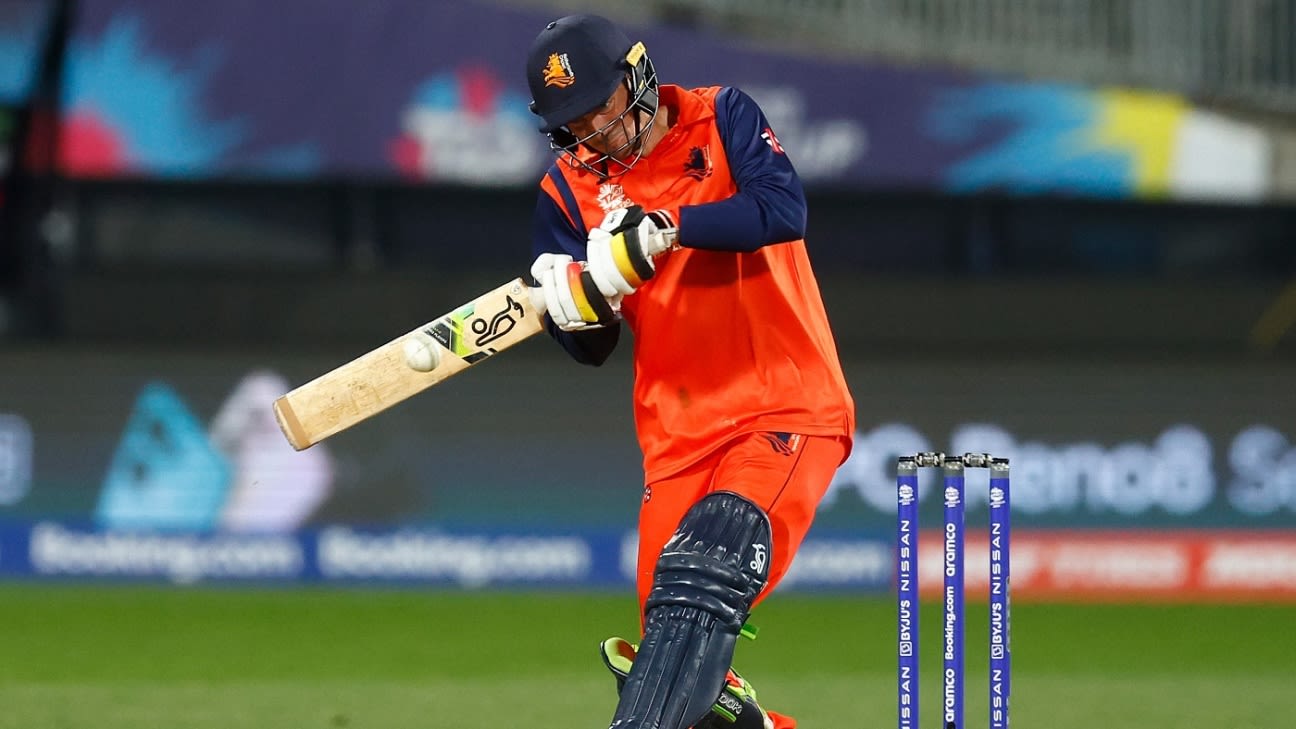 Tim Pringle, son of former New Zealand player Chris Pringle, knows a thing or two about playing in the cold, having grown up in the Bay of Plenty. On a cold Geelong evening, when he mistimed the second ball he faced towards extra cover, he briefly gave his Netherlands team-mates the chills.
Netherlands were tottering at 76 for 6 in the 14th over of their 112 chase, having lost the wickets of Tom Cooper and Roelof van der Merwe to Junaid Siddique in the space of three deliveries. It looked very much like another wicket was about to fall but luckily for Pringle, UAE captain CP Rizwan put down the catch after doing all the hard work in getting to the ball.
Related
Pringle went on to make 15 crucial runs, taking Netherlands to within nine runs of victory, before Logan van Beek, the Christchurch-born Dutch international, and Scott Edwards, who lives less than a couple of hours from Kardinia Park, took the team home.
Pringle made his runs off 16 deliveries, firmly focused on nudging it around rather than looking for the big hits. At a ground where the straight boundaries are long and the slog over midwicket needed to carry 80 metres to clear the fence, this was a smart move.
In fact, from the ninth over right to the very end, Netherlands didn’t hit a single boundary, as compared to the seven fours and a six prior to that. It wasn’t for lack of trying though; just that every time they hit out, they lost a wicket. So they needed to come up with a plan B.
Scott Edwards played a crucial hand in a tight chase•ICC via Getty Images
“It was just a little bit up and down,” Edwards said of the surface. “Obviously the outfield was super slow, so we probably got a bit carried away with trying to hit boundaries where they showed us in the first innings that it was quite hard to get those boundaries, so you’ve just got to be busy. We got a little bit caught up in that middle period and then sort of consolidated a little bit.”
With Rizwan bowling out his trump card Siddique, who finished with figures of 3 for 24, by the 18th over, Netherlands knew they had enough time to win the game in singles. They needed ten from the last 12 balls with four wickets left.
“I think it is one of those things that you don’t get ahead of yourselves,” Edwards said. “We had a good powerplay. I think 40 [37] off the first four overs and then we probably just got a little bit carried away thinking it was going to be an easy win. Yeah, we obviously knew from the first game and the first innings of our game that it wasn’t like that.
“It was just about taking it as deep as we could, it felt like we could keep it up at run a ball. They obviously had to bowl out a couple of their better bowlers early, so we knew at the back end we had opportunities to score if we needed to.”
Edwards lauded Pringle’s maturity and game smarts, not just with the bat but also with the ball. The left-arm spinner finished with figures of 4-0-13-1 earlier in the evening.
“For a guy who is only 19 years old [20], he showed a lot of maturity,” Edwards said. “Today was another example of the quality bowler he is. You can always rely on his four overs: they’re always going to be the same. We got a couple of wickets in tying them down. He knows his role perfectly there. And with his batting, he is a powerful man. He didn’t quite get all his shots as he would have liked today but after his first couple of balls, he was pretty calm and collected.”
Tags: ICC Men's T20 World Cup, Netherlands, Scott Edwards, Tim Pringle, U.A.E. vs Netherlands, United Arab Emirates

Ian Bell happy with the work-out against spinners