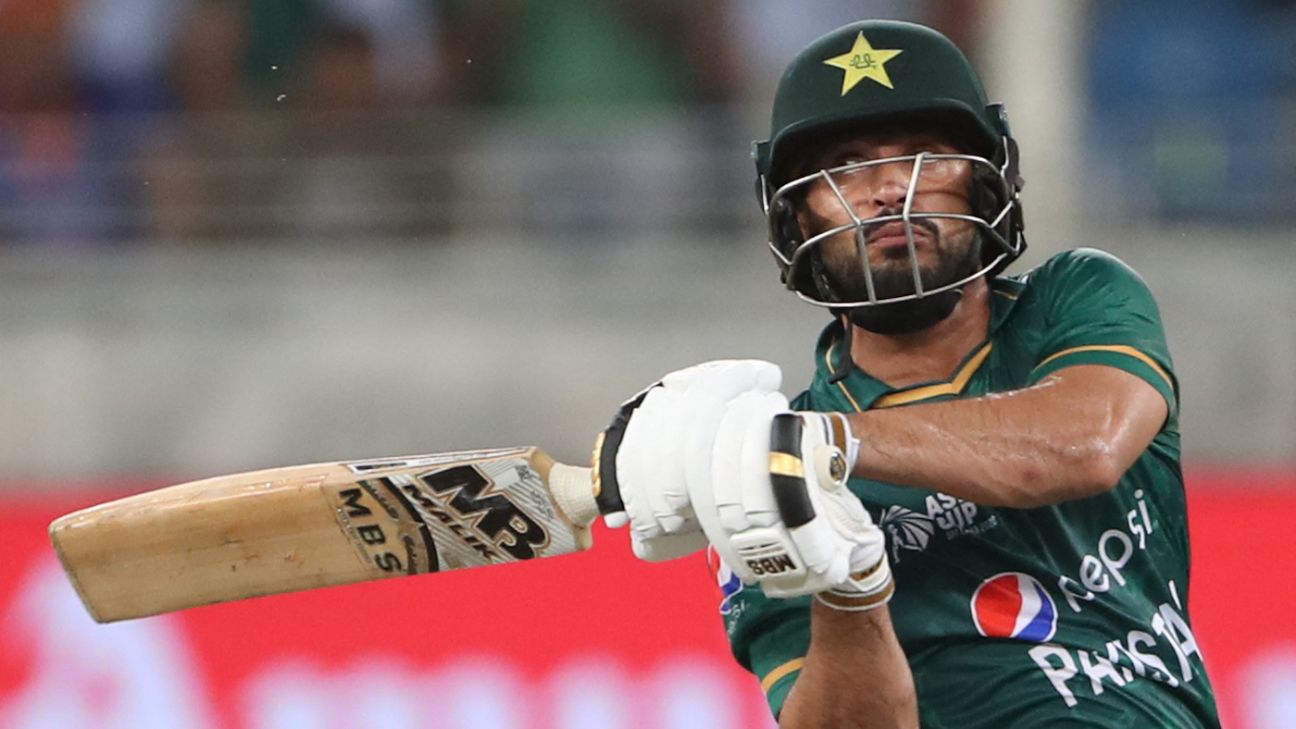 Pakistan 177 for 3 (Rizwan 69, Babar 55, Nawaz 45*, Mahmud 2-27) beat Bangladesh 173 for 6 (Litton 69, Shakib 68, Naseem 2-27, Wasim 2-33) by seven wickets
An unbeaten 20-ball 45 from Mohammad Nawaz helped Pakistan overcome their middle-overs jitters to defeat Bangladesh in the last league game in Christchurch. Pakistan now face New Zealand in the final on Friday, while Bangladesh head to Australia for the T20 World Cup having lost all their four games in the tri-series.
Even though Pakistan won the match by seven wickets, the finish was closer than what the scorecard suggests. Babar Azam and Mohammad Rizwan set up the platform with their eighth century stand in T20Is, but Pakistan did not run away with the chase because of some disciplined bowling from Bangladesh.
It was Nawaz’s innings at a strike-rate of 225 that finally swung the game decisively towards Pakistan. It also helped him redeem his bowling figures, having conceded 37 runs in three overs in the first innings. Nawaz was Pakistan’s most expensive bowler as Litton Das and Shakib Al Hasan scored fifties to help Bangladesh score their highest total of the tri-series.
Litton’s turnaround, Shakib’s consistency
Bangladesh tried another new opening pair with Soumya Sarkar partnering Najmul Hossain Shanto but they once again lost an early wicket. That brought in Litton at No. 3 but he suffered a muscle strain early in his innings, which suggested that he would not be able to bat much longer. Instead, his inability to run fluently freed him up and he relied on hand-eye coordination to dominate a young Pakistan pace attack comprising Naseem Shah, Mohammad Hasnain and Mohammad Wasim.
Luckily for Bangladesh – especially with the T20 World Cup looming – Litton’s muscle strain seemed to go away, and he built an 88-run stand for the third wicket with Shakib Al Hasan. Their partnership allowed Bangladesh to build some momentum through the middle overs, a contrast to their previous three performances in the tri-series.
Shakib and Litton batted together from the sixth over to the 15th, dominating Shadab Khan’s legspin and Nawaz’s left-arm orthodox spin. When the pacers went short, the batters countered with pulls and cuts, and Litton also enjoyed a bit of luck when Pakistan dropped a catch and missed a chance to run him out.
Shakib batted until the penultimate over to score his second consecutive fifty in the tri-series. He used his feet to get to the pitch of the spinners and exploited the leg side in the slog overs. Bangladesh, however, could score only six runs off the last eight balls after Shakib was dismissed. They finished on 173 when they were looking for a total above 180, credit for which goes to Wasim who conceded only three runs in the 20th over.
Nawaz ensures Pakistan finish the job
Bangladesh had a young seam-bowling unit too and it was their most inexperienced medium-pacer Hasan Mahmud who impressed the most. He took 2 for 27 in four overs and did not allow Pakistan’s openers Babar Azam and Mohammad Rizwan to dominate him.
Taskin Ahmed and Shoriful Islam also used changes of pace to force mis-hits from the batters, and though Babar and Rizwan raised their century stand in the 13th over, the game remained in the balance.
In his last spell, Mahmud dismissed Babar and Haider Ali in the same over, which fuelled Bangladesh’s hopes of victory. What they needed was a couple of tidy overs, perhaps with another wicket before the death, but it wasn’t to be as Rizwan stayed steady while Nawaz found the boundary early in his innings.
Mohammad Saifuddin was the weak link in the Bangladesh attack on the day, conceding 53 runs, and Nawaz and Rizwan entered the slog overs with momentum on their side.Though Rizwan fell in the 19th over, Nawaz played the field, hitting the ball into gaps and milking a hat-trick of twos to shut Bangladesh out in the final over. He ended the contest with a boundary off the penultimate ball of the match.
Tags: Bangladesh, Bangladesh vs Pakistan, New Zealand T20I Tri-Series, Pakistan