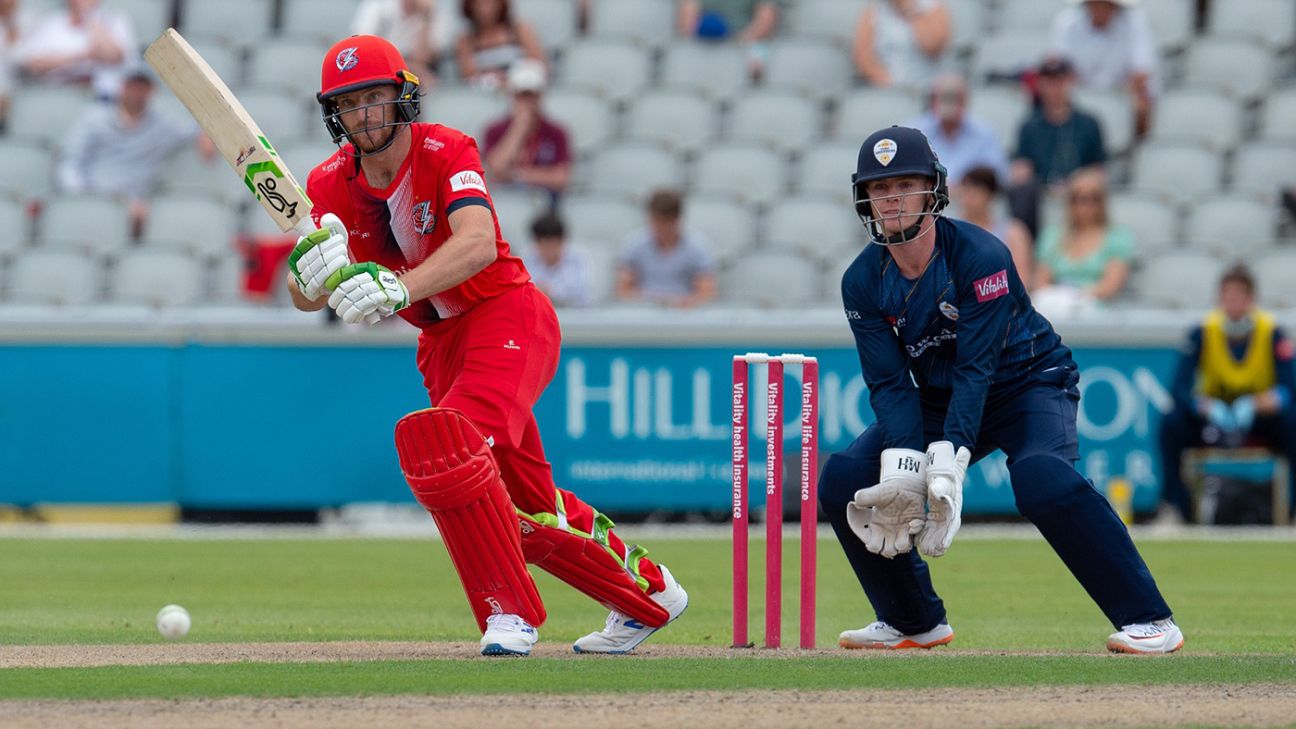 Jos Buttler, England’s white-ball captain, will remain a Lancashire player at least until the end of the 2025 season after signing a three-year extension to his contract.
Buttler, 32, is currently in Australia preparing for England’s T20 World Cup campaign, and while his new deal extends a relationship with Lancashire that began when he joined the club from Somerset in 2013, it is unlikely that the club will see much of him in the foreseeable future.
His ECB central contract restricts his availability during the English season, as does his marquee status as one of the most sought-after overseas batters in the IPL – he was last season’s MVP and Orange Cap winner after scoring 863 runs in 17 matches, including four centuries – and his role as Manchester Originals’ captain in the Hundred.
Buttler played a solitary T20 Blast match for Lancashire in the 2022 season, making 42 from 29 balls against Worcestershire in July. He has not played a County Championship game since the Roses match in July 2018 and his most recent List A appearance for the county was even longer ago, also against Yorkshire at Emirates Old Trafford in 2016.
Nevertheless, he played a key role in Lancashire’s first T20 Blast title in 2015, with important runs in both the group stage and knock-outs, and said that he looked forward to further appearances when the opportunity arises.
“I am really pleased to commit my county cricket future to Lancashire, the club which provided me with an opportunity to achieve my ambitions when I joined from Somerset back in 2013,” Buttler said.
“Whilst I have not had the opportunity to come back as much as I would have liked in recent seasons, it is always a privilege to represent the Red Rose and play at Emirates Old Trafford in front of our Members and supporters.
“I will always look to help the club wherever I can and hopefully there are plenty of opportunities for me to able to do so during the next three seasons.”
Mark Chilton, Lancashire’s director of cricket performance added: “We are delighted that Jos has signed a new three-year contract with Lancashire Cricket.
“We are all aware of the limitations within the schedule for a cricketer in demand such as Jos, however, as England men’s white-ball captain and a World Cup winner, the value of the experiences that Jos, when available, can impart into our dressing room cannot be underestimated.
“Jos is one of the most feared white-ball batters in world cricket and to have the option to include him in our side, when the schedules allow, is something which can only make us stronger and benefit our younger players to learn from such an elite performer.”
Tags: Jos Buttler, Lancashire