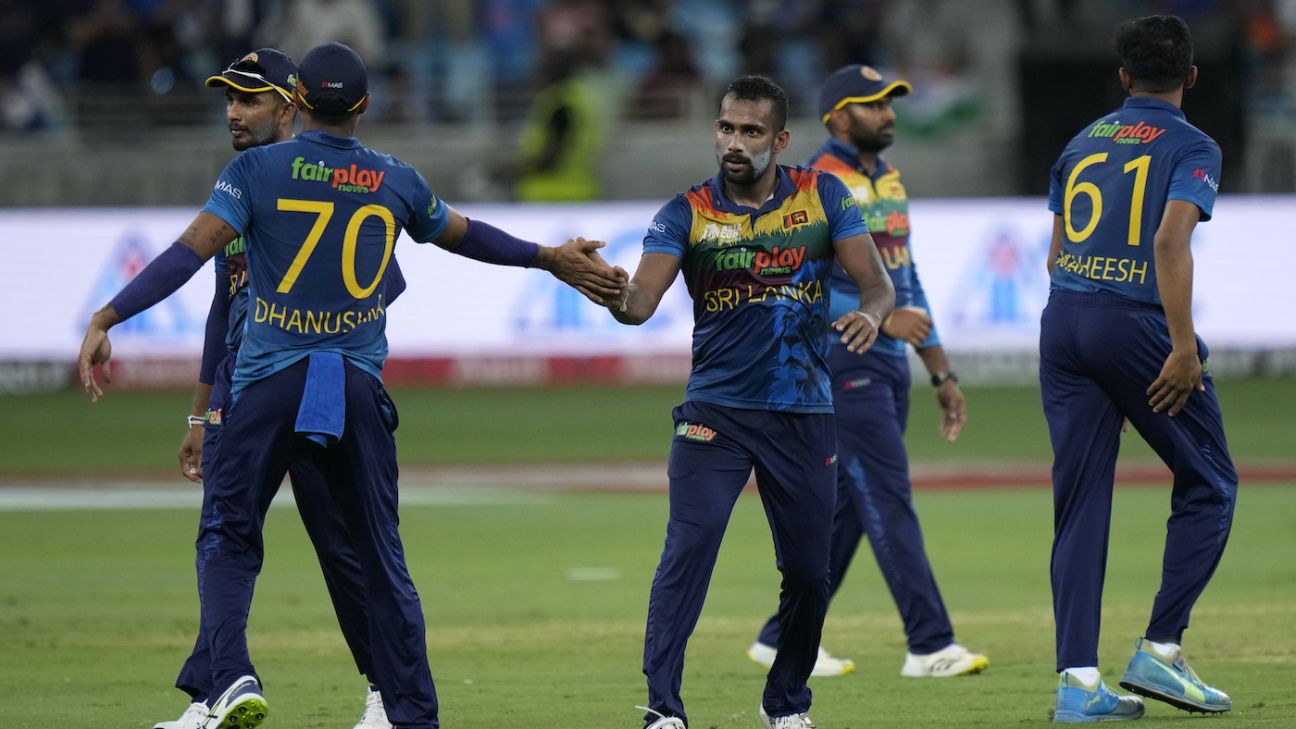 If the last year is anything to go by, Sri Lanka don’t mind doing things the hard way.
In their most recent Test series at home against Australia, they lost the first Test comprehensively before bouncing back to take the second. In the ODI leg of the tour, too, there was a first-game defeat before winning three on the trot to take the series. They then repeated the trick against Pakistan, losing the first Test and winning the second. And then, most recently, they suffered an big defeat to Afghanistan in the Asia Cup opener before winning five in a row to take the title.
Related
Safe to say, an early wake-up call seems to be a go-to Sri Lankan strategy of late – well, at least that’s the running joke within Sri Lankan cricket social-media circles. Even so, Sunday’s 55-run defeat to Namibia has taken the now-customary slow Sri Lankan start to new levels – or depths.
As things stand right now, Sri Lanka know they need to win their next two games, against UAE and Netherlands, to have a chance to make the main round of the T20 World Cup, but they will need other results to go their way because of the heavy opening-day loss. And that’s without considering possible washouts.
“You know, yesterday we lost the match, and so right now, somehow we have to win; no matter what, we have to win the next two matches,” Chamika Karunaratne said, speaking ahead of Tuesday’s game against UAE. “I think the boys all know that. We are definitely going to put more than 100% in the next two matches. We are looking at the players that we have right now.
“Still, all four teams are playing good cricket. Even in the last match yesterday, UAE versus the Netherlands finished in the last ball. We don’t know what can happen, and because this game is always exciting and a bunch of funny things. Anything can happen, so we’ll see.”

“What we have to do is we have to bring the right attitude. That’s the most important thing. But we have to have that”
Chamika Karunaratne

Reflecting on their loss to Namibia, Karunaratne echoed Dasun Shanaka’s sentiments from the previous evening, giving credit to their opponents while accepting his own team’s failings.
“We just had a bad day, and we have to accept that Namibia played good cricket yesterday from all three departments, batting, bowling and fielding,” he said. “So we have to accept that, and what we have to do is we have to review what we did, our mistakes and everything.
“So we will take it more seriously and just play the next few matches because we are better than that. We are so much better than that.”
The similarity with the Asia Cup start were pointed out to Karunaratne, but he was keen to highlight the differing circumstances.
Sri Lanka won the Asia Cup after losing their first match against Afghanistan•AFP/Getty Images
“[At] the Asia Cup, we lost to Afghanistan in the first match, and after that, we won all the matches. But we aren’t thinking the same way because the Asia Cup is over now. It’s history,” he said. “Now we have to think about the World Cup. Different places, different conditions, and different countries.
“The ground is also so different. Even one side is 57, one side is 55, and long straight. So many things are different, so we have to plan, and we have to play our game.”
After that Asia Cup win, Sri Lanka had been touted by many as dark horses for the World Cup. Provided they make it through following this early blip, Karunaratne feels they have all the tools in place to go deep in the tournament.
“We have everything. We have the power-hitting, we have players who can control the game, and we are fit players, strong players and mindful, tactical – we have all who can play in the different areas, where we have the pace, we have the variation and the spin is really good,” he said. “What we have to do is we have to bring the right attitude. That’s the most important thing.
“But we have to have that. Not for us, even for the other sides, as well. But I think if we bring the right attitude – that’s the main thing – we can beat any team anytime.”
Tags: Chamika Karunaratne, ICC Men's T20 World Cup, Sri Lanka, Sri Lanka vs U.A.E.