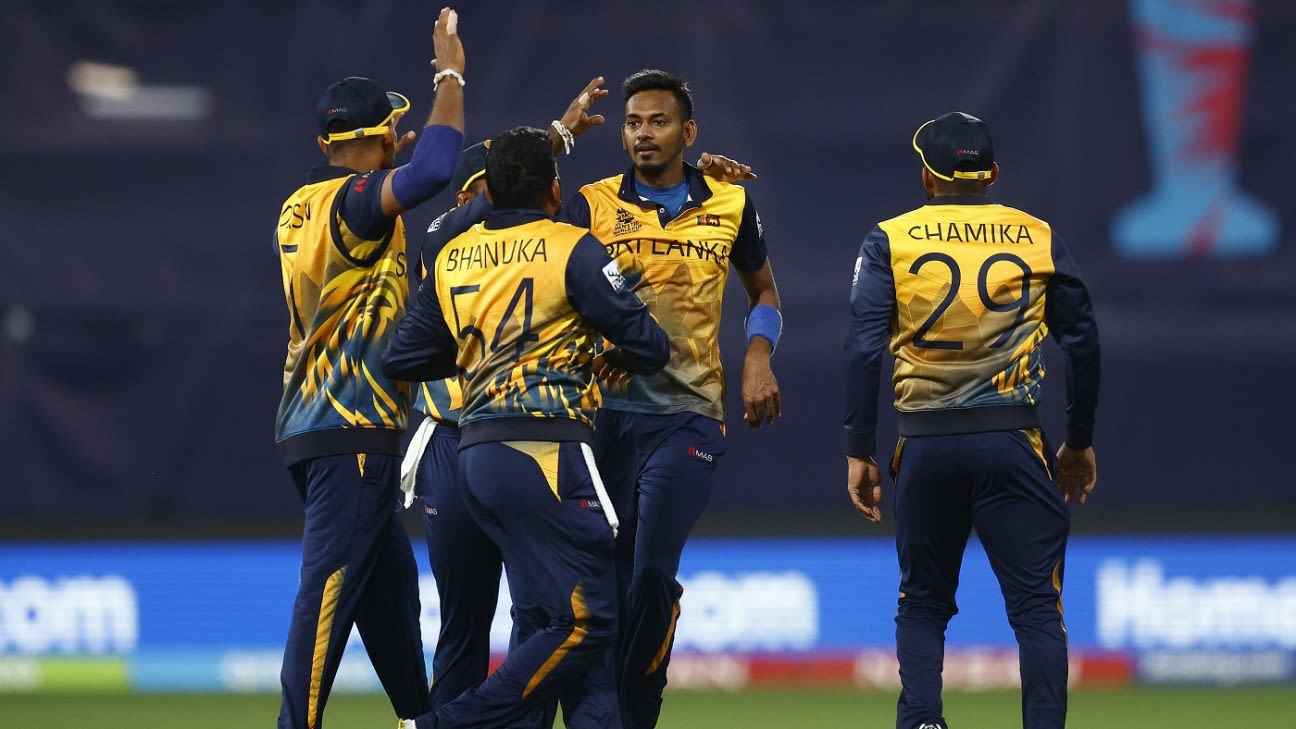 Dushmantha Chameera has been ruled out of Sri Lanka’s final Group A match against Netherlands, a match they will almost certainly need to win in order to qualify for the Super 12s stage of the World Cup.
Chameera claimed 3 for 15 in a thumping win over UAE that has increased Sri Lanka’s chances of progression, but was unable to finish his spell after pulling up with a calf injury. It was later confirmed to ESPNcricinfo by Professor Arjuna de Silva, who oversees Sri Lanka’s medical operations, that Chameera would miss the Netherlands game, with his participation in the rest of the tournament in doubt.
There are also concerns over Danushka Gunathilaka, who missed the UAE game, and Pramod Madushan, with both due to go for scans on hamstring injuries, although Sri Lanka’s medical team are hopeful the latter’s is not too serious.
Related
The loss of Chameera and, potentially, Madushan is a blow after Sri Lanka’s bowlers dominated the match against UAE, dismissing the opposition for 73 inside 18 overs. There remains concerns over the side’s batting, after they collapsed from 117 for 3 in the 15th over to only post 152 for 8.
Having also put up a poor batting performance against Namibia, Sri Lanka’s middle order go into the last match of the qualifying stage significantly short of runs. For coach Chris Silverwood, this may have something to do with the weather, as temperatures have frequently dipped into the low teens in Geelong over the past two weeks.
“The temperatures we’re experiencing, the boys are not used to,” Silverwood said. “It’s certainly not Colombo. Even I’m cold, a little bit. You can’t help it. The preparation and facilities we were given having arrived early, were superb. The boys have prepped the best we possibly can. We had a good camp in Kandy before we got on an airplane and came here. We’ve made the best of what we’ve had really.”
The bowlers, at least, put in a complete performance on Tuesday. Seamers Chameera and Madushan decked the top order, before the spinners ripped out UAE’s middle- and lower-order batters.
Dushmantha Chameera is mobbed by his team-mates•ICC via Getty Images
“I think we adjusted pretty well today,” Silverwood said. “In the first game we didn’t read the conditions particularly well, and we certainly didn’t grasp them. We’re not hiding from that. That’s something that we spoke about in the debrief quite honestly.
“They’ve faced facts and and come out today, and applied themselves much better. The track was a little bit slow. We saw that if the bowlers bang it in hard, it’s very difficult to get them away. So we have to be patient, we have to build innings, and for the majority of today we did that.”
Sri Lanka’s top three also provided a good platform at the start of the match. Opener Pathum Nissanka was Sri Lanka’s best performer on the batting front, scoring one more run (74 off 60) than UAE’s entire team did. He progressed in a measured fashion through the early overs, before striking boundaries towards the death to raise his strike rate, on a difficult surface.
“Pathum at the top of the order played a real match-winning innings. He should be very proud of himself for what he’s done, helping the team get across the line.”
Tags: Chris Silverwood, Danushka Gunathilaka, Dushmantha Chameera, ICC Men's T20 World Cup, Pramod Madushan, Sri Lanka, Sri Lanka vs U.A.E., United Arab Emirates