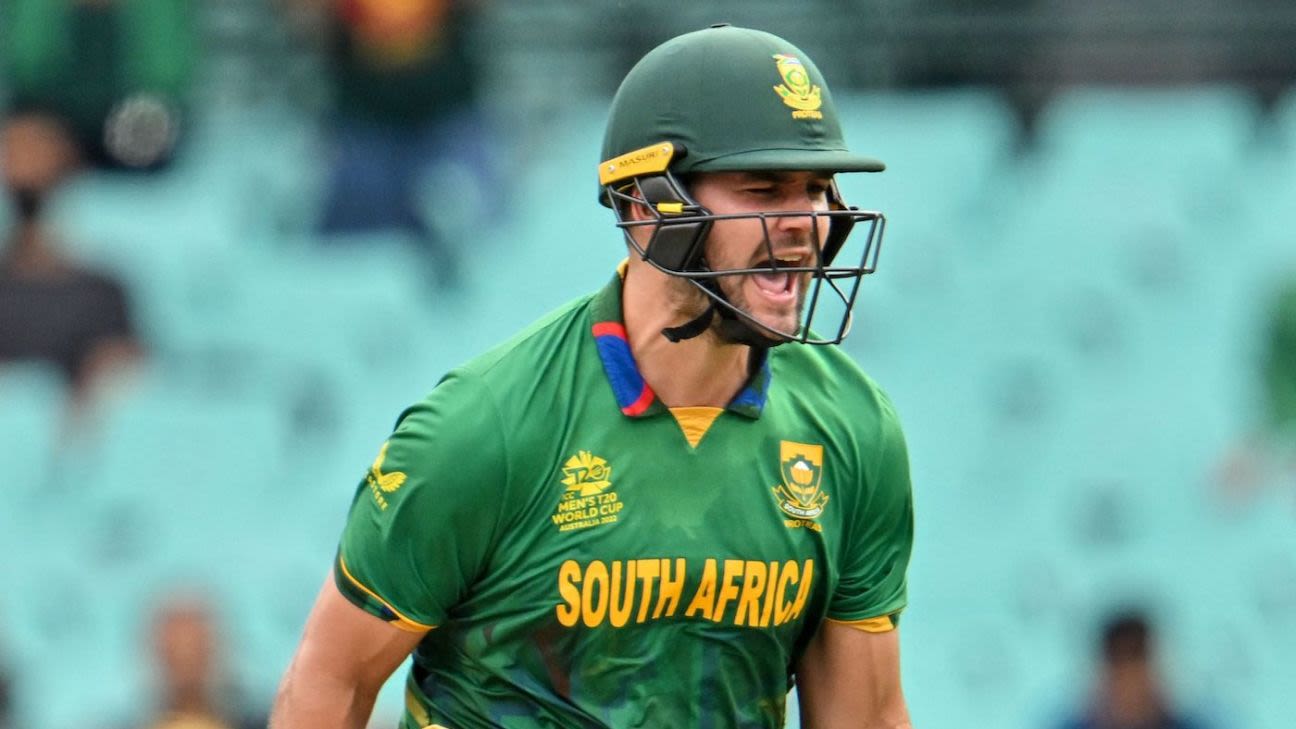 It has been a remarkable return to international cricket for Rilee Rossouw. After six years away, during which he took up a Kolpak deal in county cricket that did not go down well with CSA, he has now compiled back-to-back T20I centuries, alongside an unbeaten 96, in just seven innings.
His numbers for the year are eye-watering: 340 runs at 68 with a strike rate of 184.78. In a way, those figures are made more extraordinary given he made two ducks against India. He has been given the pivotal No. 3 slot and has made it his own.
Related
All five of his T20 hundreds have come since 2019. In that time, he has averaged 38.55 with a strike-rate of 156.88; up to the start of 2019, the corresponding figures were 26.16 and 131.07. He is a player transformed in this format.
He had come within one blow of a century in the second innings of his comeback, against England. But, against India in Indore, shortly before this tournament, he crunched a 48-ball hundred. Now, less than a month later, he has done it again and there was plenty of emotion on show at the SCG, a ground that had been good to him before. He has batted three times here for South Africa and passed fifty on each occasion.
“I’m a very passionate man and getting across the line meant a lot to me, meant a lot to my family back home,” he said. “It’s been a good rollercoaster ride just to play for South Africa again, it’s been amazing. You know sometimes things go your way and this year has been like an unbelievable rollercoaster ride for me. So happy, so proud to be sitting here. Never thought about it in a million years.”

“You’ve got to expose yourself to that type of environment. And I’ve been fortunate enough in the last six or seven years of my career to be in that position, and it’s just made me a better player”
Rossouw on his ability against spin

It did not take him long to get going, any joy Bangladesh felt about removing Temba Bavuma in the first over quickly evaporating [that issue is not going away for South Africa]. On his eighth ball, Rossouw deposited Hasan Mahmud straight down the ground for six; in the next over there were two more, swept this time, off Mehidy Hasan Miraz.
“If I get a boundary early in my innings I kind of feel like, okay, I could be on here today, and then I just grow from that confidence,” Rossouw said.
A brief stoppage for rain did not really disrupt the flow, although there was some brief consolidation after the powerplay with Rossouw not finding the boundary in consecutive overs. Things got particularly ugly for Bangladesh in the 11th over, when Shakib Al Hasan, who had held himself back, was probably left wishing he hadn’t brought himself on when he was twice put into the stands over the leg side – the second off a huge no-ball full toss. To make matters worse, Bangladesh were penalised five runs when the wicketkeeper, Nurul Hasan, took a step back on the free hit, thus changing the field, which is not allowed.
“I thought he played it well, played his cards [as he] could,” Rossouw said of Shakib’s decision to not bowl early on. “If I was in his shoes, I also probably wouldn’t want to bowl to myself or Quinton de Kock. He was hoping he could maybe get a breakthrough from one of the other bowlers… the longer it took for him to come into the game, the more attacking we were going to be.”
“So every moment you’ve got to cherish playing for your country”•ICC via Getty
Rossouw’s play against spin is among the best in the world: since 2021, only he, Alex Hales and Marcus Stoinis have averaged 35-plus and struck at 150 when facing spin. The amount of league and franchise cricket he has played around the world during his international absence played a key part, developing skills, notably a full range of sweeps, that can often not come naturally to batters brought up in South African conditions.
“I think it’s somewhere I’ve definitely improved because I’ve played a lot of cricket in the subcontinent,” he said. “So I feel more comfortable now than what I used to maybe when I was in my 20s. You’ve got to expose yourself to that type of environment. And I’ve been fortunate enough in the last six or seven years of my career to be in that position, and it’s just made me a better player.”
Rossouw sped into the 90s with three boundaries in four balls against Taskin Ahmed; the first of them highlighting terrific placement through point, the second brute power down the ground. He was within range of beating his 48-ball effort just a few weeks ago. In the end, the final five runs took a little bit longer – part of a wider slowdown in South Africa’s innings – but a dab into the off side got the run he most wanted. There was time for an eighth six before he found a fielder.
“When you give up your right to play for your country, you expect, ‘okay, that’s just going be my last chance’,” he said. “So every moment you’ve got to cherish playing for your country. It’s been a long journey but it’s not finished yet, hopefully.”
Rossouw missed out on what could have been a number of his best years at international level, but he’s doing all he can to make up for lost time.
Tags: ICC Men's T20 World Cup, Rilee Rossouw, South Africa, South Africa vs Bangladesh