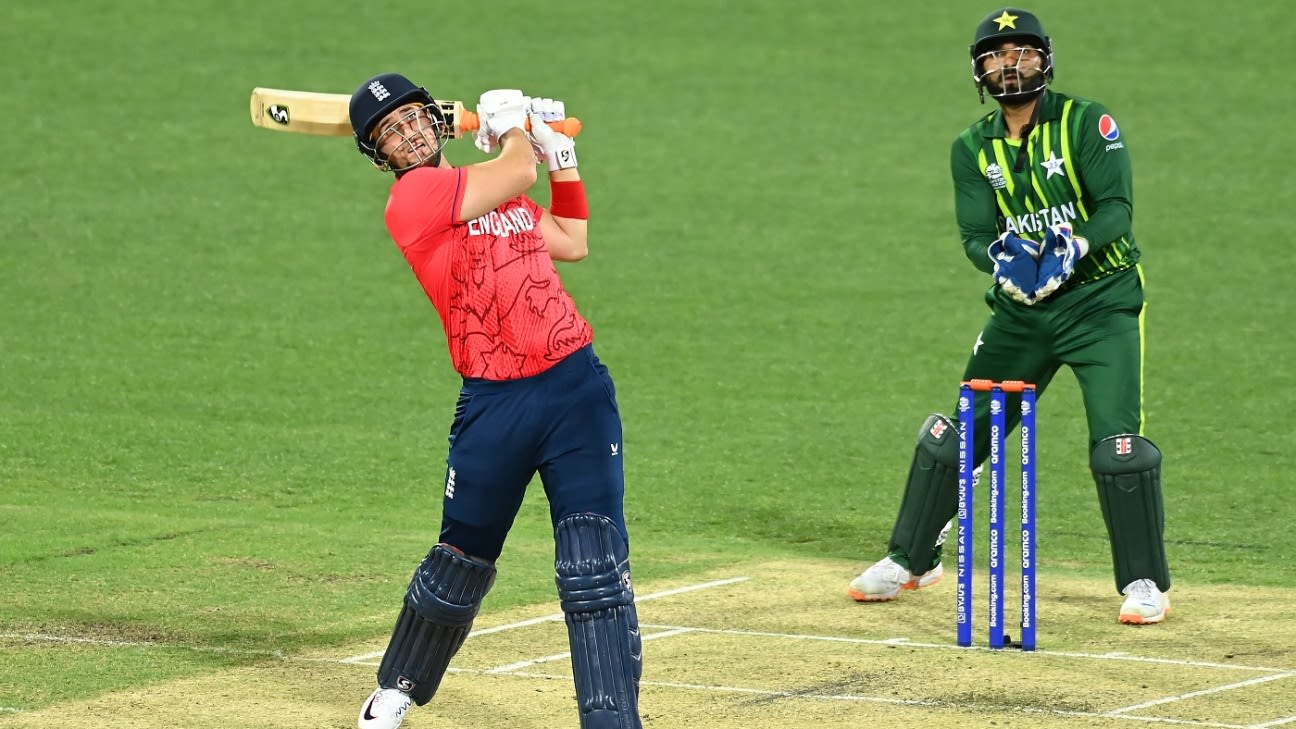 England 163 for 4 (Brook 45*, Stokes 36) beat Pakistan 160 for 8 (Masood 39) by six wickets
Liam Livingstone signalled his World Cup readiness with a comeback cameo of 28 from 16 balls – including one massive six that sailed clean out of the stadium – as England capped their tournament build-up by thrashing Pakistan by six wickets at the Gabba.
Livingstone sat out each of England’s preceding 10 T20Is against Pakistan and Australia as he nursed an ankle injury sustained during the Hundred. But in a contest that was reduced to 19 overs a side by rain, he slotted into a middle-order that blazed 12 sixes to Pakistan’s one, to romp to victory with 26 balls to spare.
Despite the inconvenience of the fixture – described by David Willey as one they “could have done without”, given they now face a five-and-a-half hour flight to Perth ahead of their tournament opener against Afghanistan on Saturday – England made optimal use of the game-time, not least Ben Stokes, who struggled with the bat against Australia but found his range on this occasion with 36 from 18.
Chasing 161 for victory, the contest was sealed in comprehensive fashion by Harry Brook (45 not out from 24 balls) and Sam Curran (33 not out from 14). With Jos Buttler and Moeen Ali both opting not to bat after featuring in the field, the only first-choice batter to miss out was Alex Hales, who made 9 from 13 balls, but Phil Salt, the alternative opening partner to Buttler, managed only 1 from 3 alongside him.
For Pakistan, only Shan Masood could match England’s explosive approach with the bat, as he opened the innings in the absence of both Babar Azam and Mohammad Rizwan, and responded with a hard-hitting knock of 39 from 22 balls.
However, from a comfortable 67 for 1 after 6.2 overs, Pakistan lost their next five wickets for 57 to slump to 124 for 6 after 14.4, whereupon only Mohammad Wasim’s 26 from 16 could revive their hopes of a competitive total. England rang the changes in the field with as many as eight bowling options, including a three-over burst from Mark Wood, and two wickets for Willey.
Pakistan’s fielding endured an off day, with several dropped chances undermining their prospects, as England completed (albeit in an unofficial capacity) their fifth win in as many completed T20Is, following back-to-back wins to defeat Pakistan 4-3 on their recent tour of the country, and last week’s consecutive eight-run wins over Australia.
“I think everything we wanted to get out of today, we did,” Buttler told Sky Sports after the match. “It’s great to see Liam Livingstone back on the field as well after a significant injury, and getting some overs into Chris Jordan as well. He’s coming back from broken finger. Brook and Curran getting some time in the middle as well … we tried a few different things that guys were wanting to experiment with. And this is the perfect time to try to do that.”
Tags: England, ICC Men's T20 World Cup, Liam Livingstone, Pakistan, Pakistan vs England