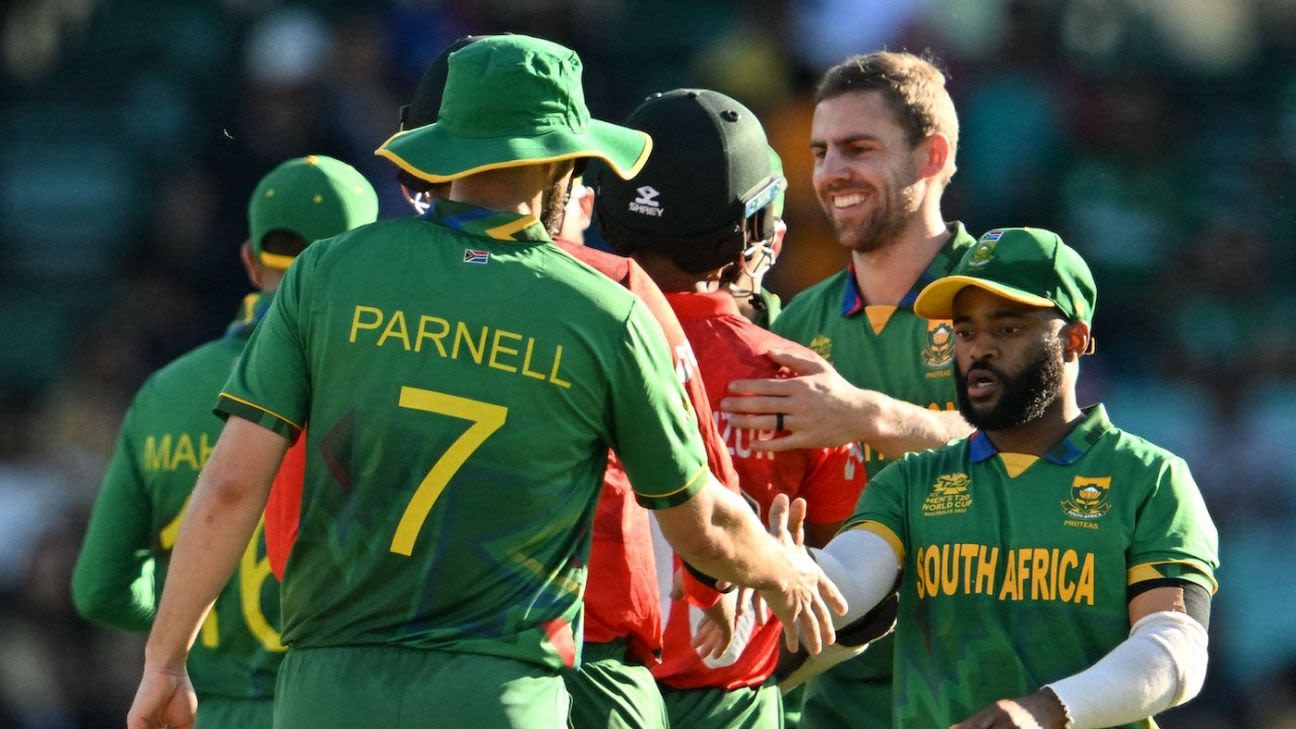 South Africa 205 for 5 (Rossouw 109, de Kock 63, Shakib 2-33) beat Bangladesh 101 (Litton 34, Nortje 4-10, Shamsi 3-20) by 104 runs
Rilee Rossouw struck the first century of this T20 World Cup to give South Africa a dominating 104-run win against Bangladesh at the Sydney Cricket Ground. His big-hitting 109 helped his side to the 2022 edition’s highest total, with he and Quinton de Kock adding 163 for the second wicket, the second-highest partnership in the tournament’s history.
Bangladesh started the 206-run chase promisingly but after Anrich Nortje’s three-wicket burst, the batters fell apart against the South African spinners. Nortje finished with his best T20I figures of 4-10, while Tabraiz Shamsi took three wickets. Getting bowled out for 101, it is now Bangladesh’s biggest defeat in this format.
It was Rossouw who really stung Bangladesh. He struck his second successive T20I century, after his maiden ton against India last month. On this bigger occasion, Rossouw took down Bangladesh’s best bowler during the Powerplay, and never relented as he struck eight sixes and seven fours in his 56-ball bash. de Kock complemented him well with 63 off 38 balls, hitting seven fours and three sixes.
Raining sixes in Sydney

Temba Bavuma’s first-over dismissal was a blessing in disguise for South Africa. Rossouw and de Kock tore into the Bangladesh attack, taking 21 off Taskin Ahmed’s second over. It was de Kock who was the aggressor at that stage, but Rossouw quickly took over with three sixes and a four in the next two overs. South Africa had to endure a 22-minute rain-break during the Powerplay, but that was the only respite for Bangladesh.
Rossouw struck six of his eight sixes between long-on and wide long-on as he smashed 57 runs off 19 balls when hitting in that zone. He struck his other two sixes through backward square-leg, while his seven fours were spread around a little more freely. de Kock struck most of his fours through point and third-man, using the reverse-sweep and cut shot to great effect. He struck his three sixes through midwicket mostly.
Anrich Nortje ran through the Bangladesh top order•AFP/Getty Images
The slowdown

After adding 91 runs in the first ten overs, Rossouw and de Kock smashed 80 runs in the next five overs. Shakib went for 21 in his first over, and later included five penalty runs when wicketkeeper Nurul Hasan was adjudged to have illegally moved behind in the last ball of his over. When Taskin conceded 23 in the 14th over, including Mahmud dropping Rossouw on 89, it seemd South Africa would get some unbelievable total.
But Mahmud himself led Bangladesh’s fightback, as South Africa scored just 29 runs in the last five overs. The bowlers gave away just a four and a six in this crucial period, with Mahmud giving away just 12 runs in two of the last three overs. Shakib too recovered from the initial shellacking, as he removed Rossouw in the 19th over, giving away just four runs.
Four-star Nortje

Bangladesh got off to a surprisingly quick start when Soumya Sarkar smashed two sixes off Kagiso Rabada in the first over. But that was all of Bangladesh’s aggression in this innings, as Nortje blew them away in his first two overs.
All he did was keep it fast and full, enough for Soumya and Najmul Hossain Shanto to swing and miss. Shakib fell lbw in Nortje’s next over, although he was unlucky as the ball had pitched outside leg-stump. Shakib however didn’t take the review. Rabada made it a very good Powerplay for South Africa when he got Afif Hossain to be caught at mid-off in the sixth over.
Spin routs Bangladesh

South Africa’s only blemish was when Tristan Stubbs dropped Litton Das on 17, probably the sun directly towards the square-leg boundary playing a part in his drop. But then the South African spinners took over. Shamsi, who was picked for the first time in the tournament, removed Mehidy Hasan Miraz, Nurul Hasan and Litton Das, all caught in the deep on-side boundaries, in three consecutive overs. In between, Keshav Maharaj had Mosaddek Hossain stumped in the 11th over.
Tags: Anrich Nortje, Bangladesh, ICC Men's T20 World Cup, Rilee Rossouw, South Africa, South Africa vs Bangladesh