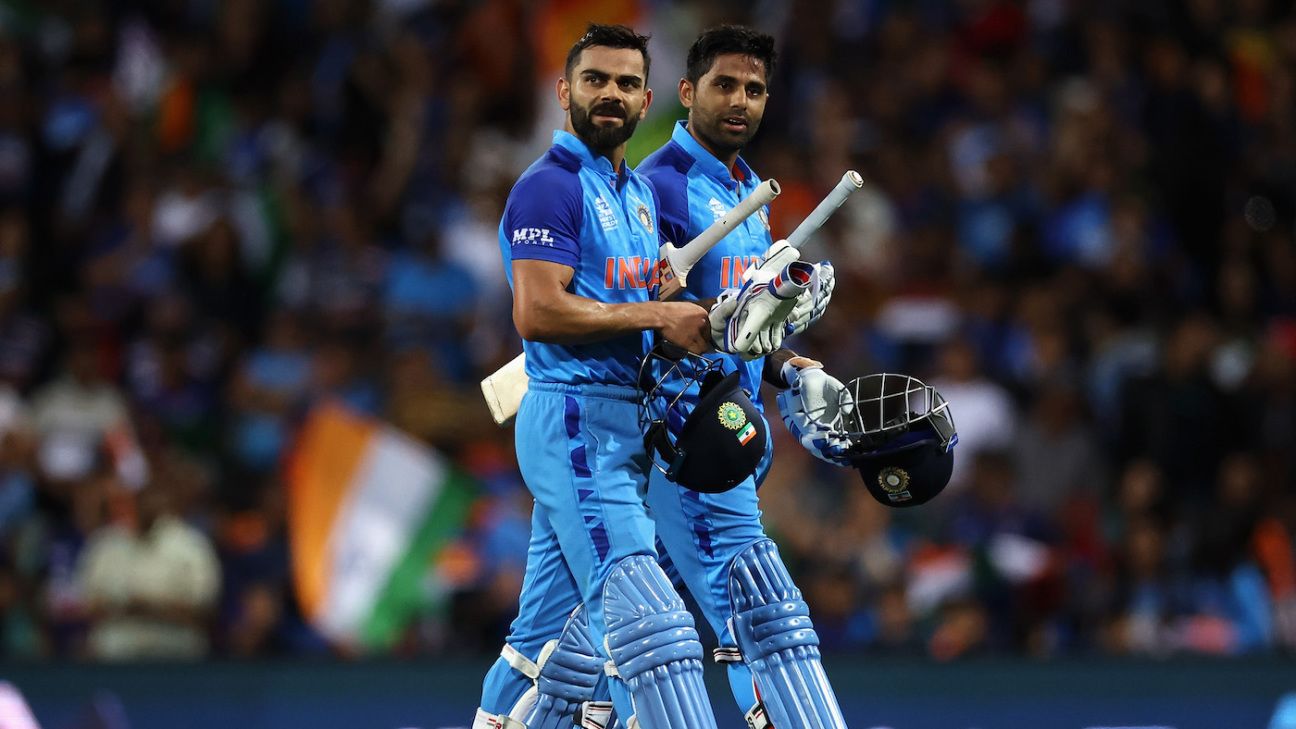 India 179 for 2 (Kohli 62*, Rohit 53, Suryakumar 51*) beat Netherlands 123 for 9 (Bhuvneshwar 2-9, Axar 2-18) by 56 runs
Fifties of vastly different moods and tempos from Rohit Sharma, Virat Kohli and Suryakumar Yadav laid the platform for India to brush Netherlands aside and move to the top of the Group 2 table with a healthy net-run-rate boost. Choosing to bat first on an SCG surface that was considerably slower than the one they played their tournament-opener on at the MCG, India put on a classic display of controlled dominance over Associate opposition, posting a par-ish total and defending it ruthlessly.
Chasing 180, Netherlands were never in the game, and for a while seemed in danger of being bowled out for under 100. They avoided that fate, and the No. 11 Paul van Meekeren finished the innings with 4, 4, 4 off Arshdeep Singh to narrow their margin of defeat, but it was still a resounding 56 runs.
India’s five specialist bowlers shared the wickets, with Bhuvneshwar Kumar, Arshdeep, Axar Patel and R Ashwin picking up two apiece, and Mohammed Shami one.
A costly non-review

The new ball swung, and occasionally stopped on the batter too. India scored just 11 runs in the first 2.4 overs of their innings, and van Meekeren picked up a well-earned early wicket too, having an lbw shout upheld after KL Rahul missed the flick off a late inswinger. Rahul didn’t review the decision, even though his opening partner Rohit seemed to suggest to him that the ball might have been swinging down the leg side; ball-tracking eventually proved Rohit correct.
Three approaches, three fifties

Rohit struggled for fluency on this sluggish surface but he kept trying to hit boundaries. He survived a dropped chance – Tim Pringle putting down a sitter at mid-on when he was on 13 – and finished his innings with a control percentage of just under 59, but his preparedness to look ugly ensured he kept the scoreboard moving in the first 12 overs of India’s innings. He made 53 off 39 balls; during his time at the crease, the two batters at the other end – Rahul and Kohli – combined to score 28 off 31.
Kohli finished with a control percentage of 75. During the first 21 balls of his innings, when Rohit was at the other end, Kohli’s control percentage was 81. Unlike Rohit, he didn’t take chances early on and chose to trust in his ability to score quickly once set. He did this, and found the boundary with increased frequency in the last five overs to score 30 off his last 14 balls, having scored 32 off 30 balls before that.
Suryakumar Yadav brought up his fifty off the last ball of the innings•Getty Images
Suryakumar, meanwhile, did what only he and a few others in the world can do. He shuffled this way and that, brought his wrists into play to whip and slice the ball into gaps, and found the boundary five times in his first 12 balls at the crease. He hit seven fours and a flicked six off the last ball of the innings to finish unbeaten on 51 off 25 balls, a jaw-dropping effort on a sluggish pitch but one that you might take for granted given how often he does these things.
Together, these three innings worked well for India to achieve what they set out to on the day. The chances Rohit took early on came off often enough for Kohli to begin conservatively, and Suryakumar’s blazing start allowed him to keep going in that vein until the last five overs.
India’s total of 179 was their lowest in T20I innings where they have lost only two wickets or fewer, and Hardik Pandya and Dinesh Karthik didn’t even come out to bat, but India probably only aimed for par on a sluggish pitch against Associate opposition. Kohli may probably have taken more risks early on against a stronger team.
Max O’Dowd was bowled by Axar Patel•AFP
Bhuvneshwar sets the tone for dominant bowling display

‘Max O’Dowd or bust’ has been a fair description of the Netherlands batting at this World Cup so far, and the early overs stayed with that theme. O’Dowd found the boundary with a pair of pleasing square drives off Arshdeep in the second over, but either side of that Bhuvneshwar went 2-2-0-1, bowling with pinpoint accuracy and dismissing Vikramjit Singh, bowled swiping across the line.
With the rest of the top order struggling, O’Dowd had to manufacture boundaries and was dismissed trying to do so, exposing all his stumps to Axar and missing a sweep.
The Netherlands challenge fell away after that, as Axar and Ashwin throttled them through the middle overs, before the fast bowlers returned to clean up the lower order. Arshdeep, expensive early on, came back to take two wickets in two balls, a nasty bouncer followed by an inch-perfect yorker, and he was on a hat-trick when he began the final over. By the end of that over, though, his figures had taken a bruising, and van Meekeren had given Netherlands’ fans something to cheer about.
Tags: ICC Men's T20 World Cup, India, India vs Netherlands, Netherlands