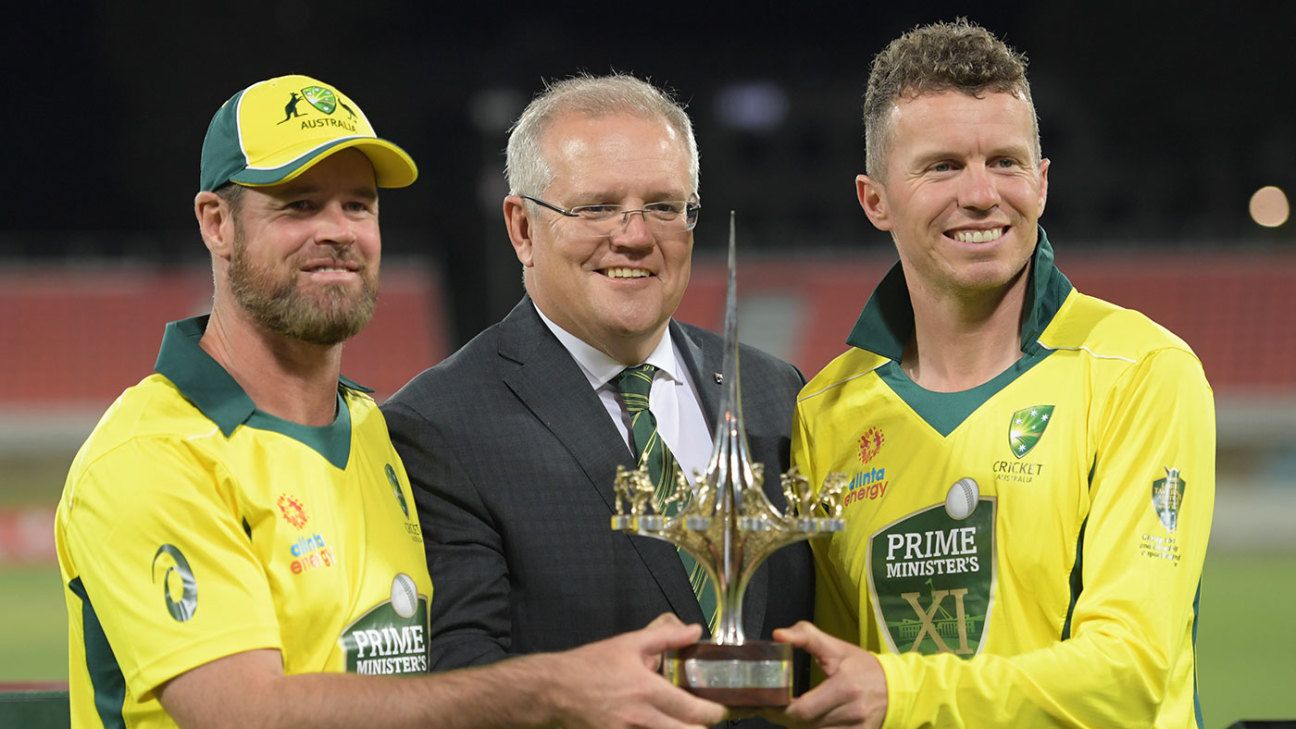 The traditional Prime Minister’s XI fixture will return this summer after a two-season gap due to Covid-19, but in a new guise as a four-day pink-ball match against West Indies ahead of their two-Test series.
The match will be played under lights at Manuka Oval from November 23-26. While the exact makeup of the squad is yet to be confirmed, it may closely resemble an Australia A side. The home team will be coached by Australia men’s assistant coach Andre Borovec alongside Jono Dean who is current coach of the Australian Capital Territory women’s side.
The fixture runs concurrent to a round of Sheffield Shield matches but it could feature a number of the emerging players in the domestic game with an eye to the future. Australia’s Test squad for the series against West Indies, which starts in Perth on November 30, will already have been selected. The second Test of the series in Adelaide will be a day-night encounter.
“The timing of the game…leading into the Test summer, for players I see it as being a stepping stone in their ability to play against international teams,” Borovec said. “The pink-ball nature of this game gives it a uniqueness that requires different skills at different times. Above all it’s opportunity and information gathering for the selectors and coaches.”
The first PM’s XI fixture was held in 1951 and also featured West Indies.
ACT chief executive Olivia Thornton said it was important for Canberra, which is currently staging two men’s T20Is between Australia and England, to be a central part in hosting major fixtures. In the coming years, the Gabba will be unavailable as it is rebuilt ahead of the 2032 Summer Olympics in Brisbane which could open the door to adding to Canberra’s one men’s Test it previously held against Sri Lanka in 2019. Last summer Manuka Oval hosted the hugely successful and thrilling women’s Ashes Test.
“We are always up for being innovative and we are certainly keen to see what it [the pink ball] is like,” Thornton said. “We’ve shown time and time again that we can produce quality surfaces, whether it’s for T20, Test matches, one-dayers, we are in pretty good hands.
“We have certainly go some runs on the board in the last little period. If you look back two years ago through Covid it was actually Canberra that facilitated a number of games here through the Big Bash.
“I was asked the other day about having to prove we’re there, I think that’s gone, don’t think we need to prove anymore. We are really proud of what we do here. I know the players love playing here, it’s a little hidden gem to some degree.”
Prime Minister Anthony Albanese will have an “active role” in picking the squad alongside national selector George Bailey.
“I am delighted to confirm the return of the Prime Minister’s XI this summer, an Australian tradition that spans 70 years,” the Prime Minister said.
“Along with Cricket Australia, I am very excited to be welcoming the West Indies. I grew up loving watching Viv Richards, Malcolm Marshall and Joel Garner, so I’m thrilled my first PM’s XI as Prime Minister will be against the current West Indies stars here in Canberra.
“I also want to thank Andre and Jono for the leadership they will provide to my PM’s XI squad. In the coming weeks, I will meet with the National Selectors to discuss what I suspect will be a very strong PM’s XI.”
In 2021 it was revealed that a plan to field an All-Indigenous Prime Minister’s XI was shelved after push back from Scott Morrison’s government.
Tags: Andre Borovec, Australia, Jono Dean, West Indies, West Indies in Australia