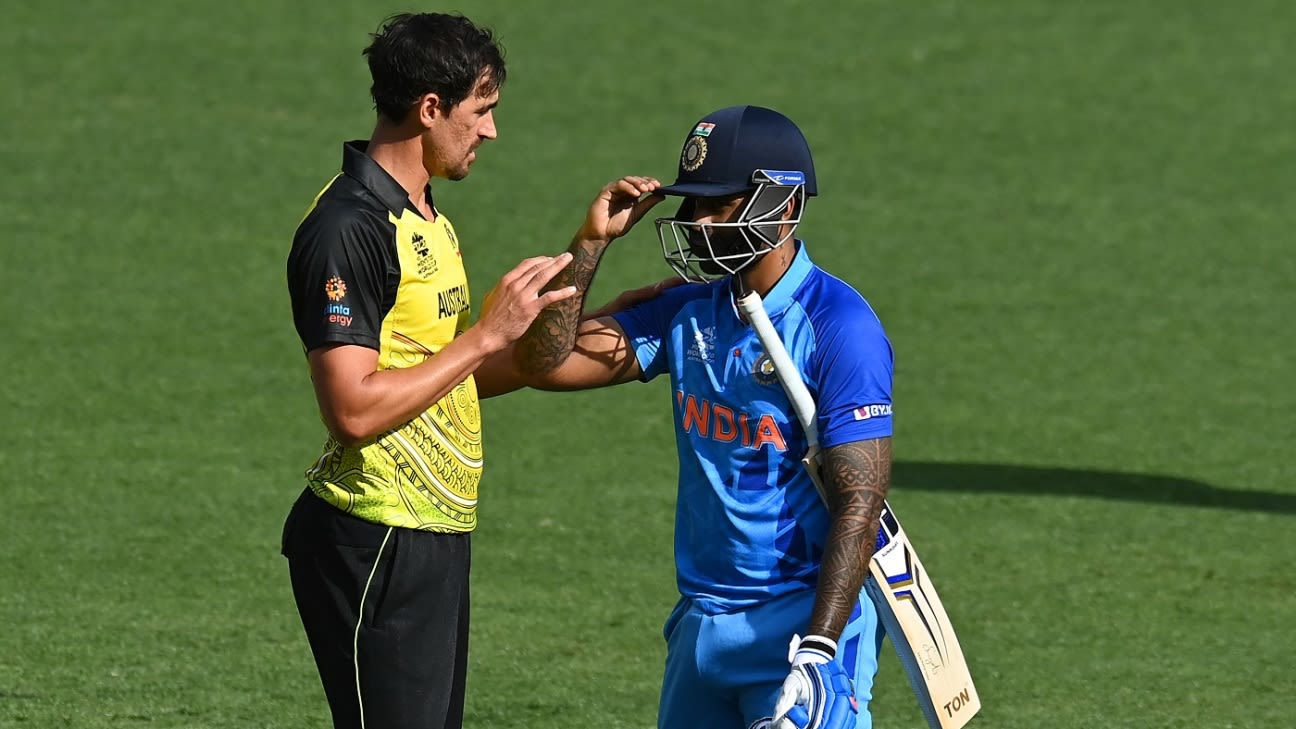 Australia fast bowler Mitchell Starc has offered an inventive solution to tackle the problem of non-strikers leaving their crease too early, suggesting that umpires use on-ground cameras to make “short-run” calls if the non-striker tries to gain an advantage.
The debate surrounding the spirit of cricket and fairness of such a dismissal was reignited last month when Deepti Sharma ran Charlie Dean out for backing up at the non-striker’s end at Lord’s.
Starc himself was recently in the spotlight over the issue, after informally warning Jos Buttler about the England batter’s tendency to leave the non-striker’s end before he released the ball. Starc now feels that docking the batting side a run in such circumstances would leave “no grey area”.
“Why not take it out of the hands of interpretation, and make it black-and-white?” Starc told The Age and The Sydney Morning Herald. “Every time the batter leaves the crease before the front foot lands, dock them a run. There’s no grey area then.
Related
“And in T20 cricket where runs are so handy at the back end and games can be decided by one, two, three runs all the time, if all of a sudden you get docked 20 runs because a batter’s leaving early, you’re going to stop doing it, aren’t you?
“It’s harder to do down the levels of cricket, but particularly in international cricket, there are always going to be cameras square-on for the front foot and for the run-outs. So, why not? And if it either makes the batters think about it – or stops it occurring – isn’t that a good thing?”
Starc said that umpires adjudicating on the penalty for the batting side would spare bowlers from toying with the idea of going through with such dismissals.
“Then there’s no stigma,” Starc said. “It’s taken away from the decision to have to run someone out or think about it. If it’s blatant, it is a different story, but I feel like that is at least completely black-and-white.”
Starc also revealed that before the recent incident involving Buttler, he had to warn many New Zealand batters during the ODI series between the two sides earlier this year.
“I’ve warned batters plenty of times, [Buttler] is not the first occasion,” Starc said. “I warned probably seven Kiwi batters in those ODI games in the top end – some were two metres outside their crease. As I said to Jos, I could never see myself doing it [running a non-striker out], but it doesn’t mean that you should then feel free to leave your crease early.”
Bowlers like R Ashwin have been vocal about promoting the use of the dismissal, having run Buttler out the same way in an IPL game in 2019. In fact, Buttler was dismissed the same way even against Sri Lanka in 2014, when Sachitra Senanayake whipped the bails off at the non-striker’s end to catch Buttler short in their ODI series decider at Edgbaston.
Running a non-striker out has historically been one of cricket’s most controversial and opinion-dividing topics. In the past, bowlers who practiced running non-strikers out – like West Indies’ Keemo Paul, for example, at an Under-19 World Cup game – have taken a step back from doing so after receiving backlash over their decision.
After Deepti’s decision to run Dean out, the MCC has proactively pushed to destigmatise the form of dismissal by tweaking its law books and stressing on its legitimacy. While some bowlers choose to warn non-strikers before actually breaking the stumps, a bowler is lawfully not required to do so.
The MCC has done this by shifting the move of a player being run out by the bowler while backing up from Law 41 (which deals with unfair play) to Law 38 (which deals with run-outs) in its recent update.
“The bowler is always painted as the villain, but it is a legitimate way to dismiss someone, and it is the non-striker who is stealing the ground,” Fraser Stewart, the MCC Laws Manager, had told the Times in March 2022. “It is legitimate, it is a run-out and therefore it should live in the run-out section of the laws.”
In the past, bowlers have tackled the idea of effecting a run-out at the non-striker’s end differently. Dean herself, one day after being out that way, found humour to warn non-strikers without actually going through with the dismissal.
Others – like Stuart Broad recently – have said they wouldn’t want to win games in that manner.
Tags: Australia, Mitchell Starc