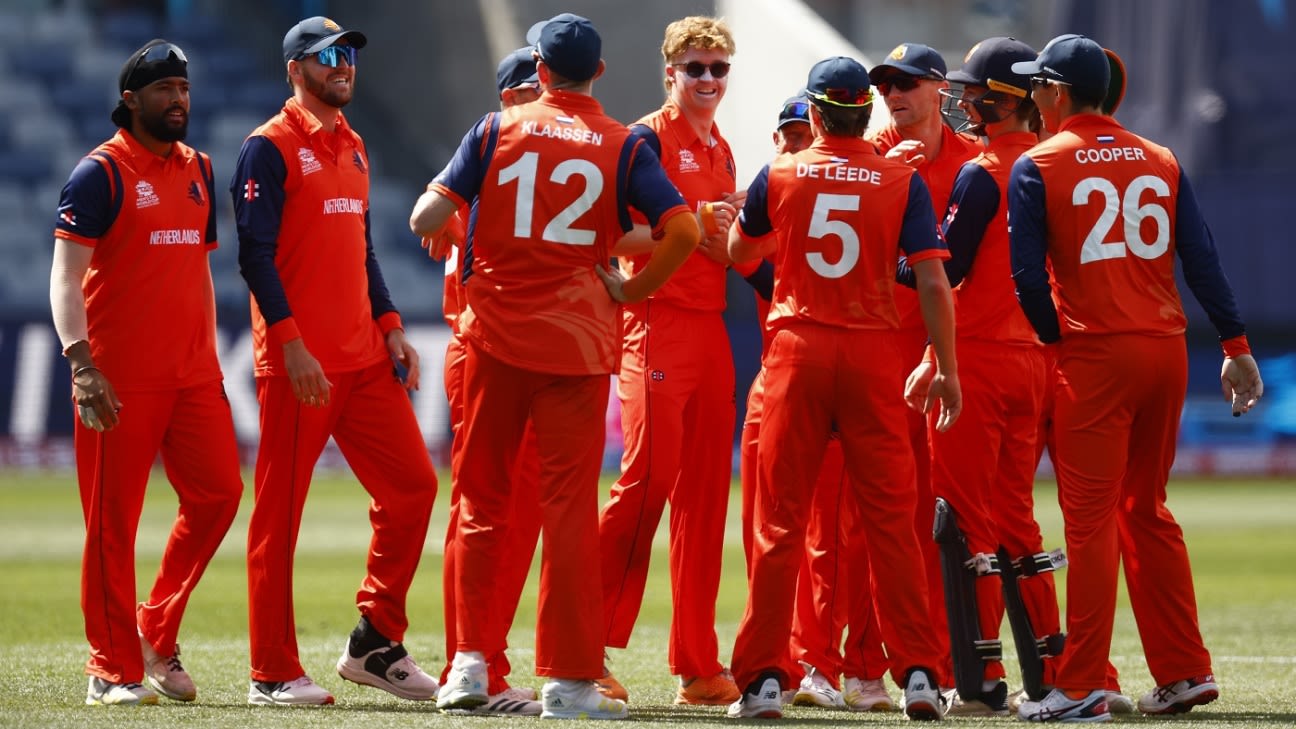 Netherlands 122 for 5 (Vikramjit 39, O’Dowd 35, de Leede 30, Smit 2-24) beat Namibia 121 for 6 (Frylinck 43, de Leede 2-18) by five wickets
Netherlands bossed Namibia and then, despite a bit of a hiccup, did the job with the bat to script a five-wicket win in Geelong and get one foot in the Super 12s.
Netherlands bowled well as Namibia struggled to get going after opting to bat first. Jan Frylinck, the Player of the Match in their game against Sri Lanka, top-scored for Namibia with a 43-ball 48, but there was little else to talk about in their innings as they only put up 121 for 6.
The chase started well for Netherlands thanks to a strong opening stand of 59 runs between Max O’Dowd and Vikramjit Singh, but a flurry of wickets in the 16th and 17th overs pushed the game to the final over before the job was done with three balls in hand.
If UAE beat Sri Lanka in the second game of the day, Netherlands will be through to the main round.
The Netherlands bowlers never really allowed the Namibians to get away•ICC via Getty Images
No-power play
Netherlands were on the spot with the ball from the get-go in Geelong, where a new pitch was in use. Fred Klaassen found swing with the new ball and gave away just four runs in the first over. Namibia introduced left-arm spinner Tim Pringle in the next over and he struck second ball, getting Divan la Cock caught at long-off – the only fielder in the deep at that point – for a duck.  Namibia found it difficult to find the boundaries and the slow outfield did not help their cause either. Colin Ackerman came on with his offspin after that, mainly to counter the left-handed Michael van Lingen, but he was welcomed with a couple of boundaries.
The match-up eventually worked, with van Lingen mistiming a loft and finding Bas de Leede at mid-off a couple of balls later. In the very next over, Paul van Meekeren got Jan Nicol Loftie-Eaton to edge one behind with a ball that seamed away, leaving Namibia at 33 for 3 at the end of the powerplay.
Stephan Baard got an lbw dismissal reversed in the last ball of the sixth over, which came as a relief for the struggling Namibia.
Jan Frylinck made a 48-ball 43 to push Namibia past 100•ICC via Getty Images
The slowdown
Frylinck struck a four off van Meekeren in the third ball of the eighth over, and Namibia then had to wait till the fifth ball of the 18th over for the next boundary, when Frylinck hit a Timm van der Gugten short delivery for a six over midwicket. With that, Frylinck also took Namibia past 100. In between these two boundaries, Namibia had also lost Baard, who fell for a 22-ball 19, while Frylinck stitched the highest partnership of the innings of 41 with captain Gerhard Erasmus.
De Leede then produced a double-wicket over, getting both of them out in the space of three balls, but JJ Smit and David Wiese hit a boundary each to take Namibia to 121.
Netherlands openers blast away
Left-arm spinner Bernard Scholtz opened the bowling for Namibia and managed to keep the openers quiet, but the fast bowlers weren’t up to the task. Vikramjit hit two boundaries off Wiese in the second over, and followed that up with two huge sixes off Ben Shikongo, first slamming a short ball over midwicket and then launching a ball in the slot to the same region. Vikramjit and O’Dowd played out Erasmus cautiously and got through the powerplay unscathed and were well ahead of the required rate, but Scholtz provided the breakthrough with Vikramjit’s wicket in the ninth over.
Vikramjit Singh gave the Netherlands chase the early impetus•AFP/Getty Images
A mini collapse, but Netherlands make it
That didn’t change things much, as O’Dowd and de Leede kept Netherlands in full control of the chase, and they needed just 30 off 38 balls.
Pretty straightforward, you’d think? Not quite.
A sensational piece of fielding from Erasmus broke the second-wicket stand, with O’Dowd falling for a run-a-ball 35. In the 16th over, left-arm quick JJ Smit struck back-to-back blows to remove Tom Cooper and Ackermann. And in the 17th, Scott Edwards chipped a full ball from Frylinck to Loftie-Eaton at cover. And, just like that, Netherlands had lost four wickets for ten runs in 18 balls.
The required rate went slightly above six at this stage, and Wiese and Smit bowled a couple of overs in which de Leede and Pringle could only get singles. But a four from de Leede off the first ball of the last over, bowled by Wiese, eased the pressure, and a scrambled two off the third ball finished the job.
Tags: Bas de Leede, ICC Men's T20 World Cup, Namibia, Namibia vs Netherlands, Netherlands