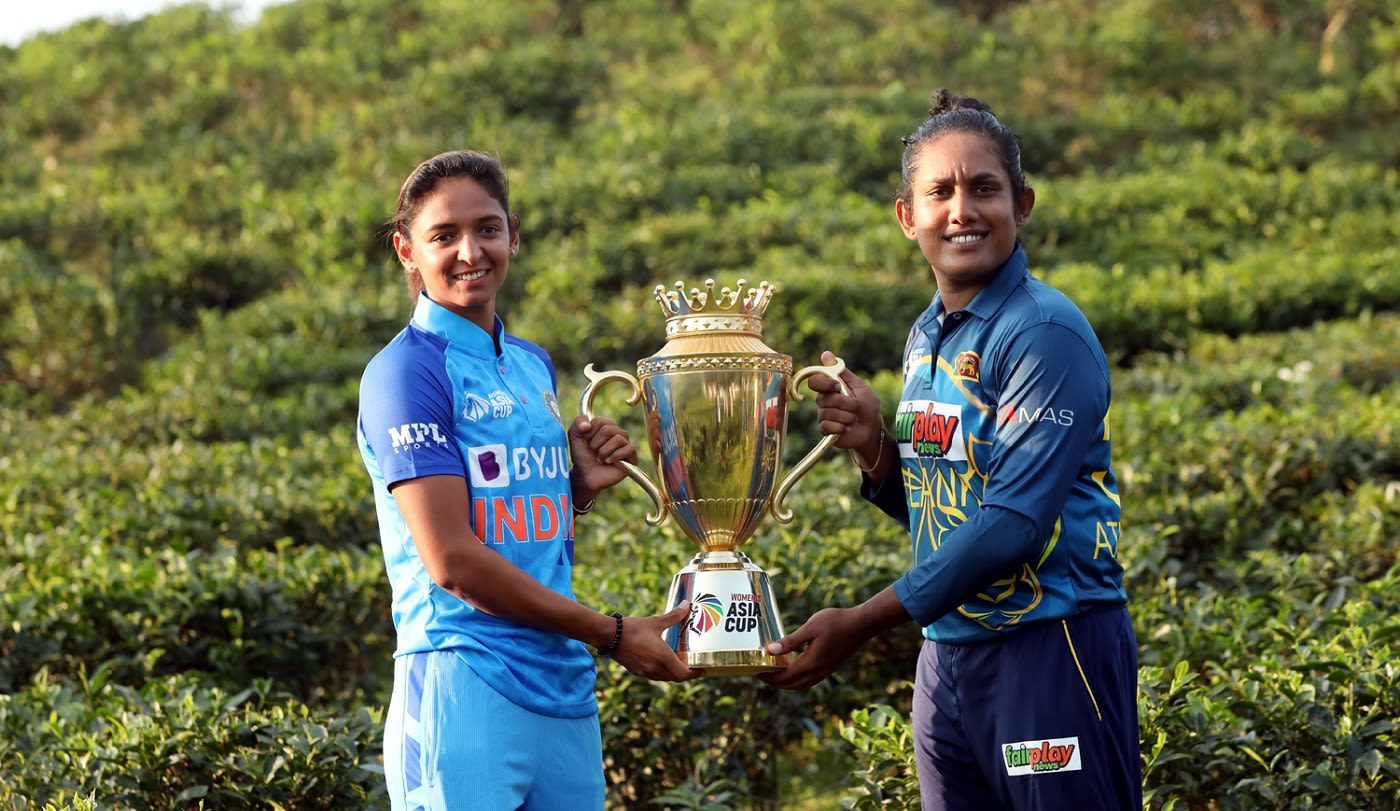 India will take on Sri Lanka in the Women’s Asia Cup final on Saturday, and Harmanpreet Kaur talked up her players’ strength of character for the quick switch from pleasant England to steaming Sylhet, hitting their stride after just one training session.
“Conditions and wickets were totally different [in England], and it is totally different here. We only got one day to change our gears,” Harmanpreet said. “In England, we were getting good batting tracks and ball was swinging. But when we got here, we had to change our plans. But the good thing was that all the players took the challenge.
Related
“We got only one [warm-up] session before the game, so it shows how strong we are as a team. The character is building. It is something I really appreciated in the team meetings also. We are enjoying our cricket.”
India lost just one game in the league phase, against Pakistan, to finish as table-toppers, and now take on Sri Lanka, who they beat comfortably, by 41 runs, on the opening day of the Asia Cup.
Along the way, they tinkered with the team combination a fair bit, and Harmanpreet said that the idea was to try different things with an aim to find new match-winners. “When we came to Bangladesh, we discussed that we need to look for a different match-winner,” she said. “We don’t want to depend on one or two players. We want every player to step up, and win the game for the team. I am happy that we are getting match-winners in every game.”
Sri Lanka finished the league stage in third place, but a close win over Bangladesh and then in the semi-final against Pakistan make them dangerous opponents.
“We saw a lot of positives in their side, especially they don’t give up till the last ball,” Harmanpreet said. “Their fight is outstanding to watch. Whenever any team plays good cricket, you can always learn from them.”

“We tried a lot of combinations. The World Cup [in South Africa next year] is around the corner. It was a great platform to test, and we are happy with how we used this opportunity”
Harmanpreet Kaur

Chamari Athapaththu, sitting next to Harmanpreet, returned the compliment: “India is the favourite team in the tournament. They have good players. But as a captain, I don’t want to feel any pressure for tomorrow’s game. Whoever plays good cricket and makes fewer mistakes on that particular day, the team can win. We will stick to our plans.”
Plans that came good in the semi-final against Pakistan, which they won by one run, to make the Asia Cup final for the first time since 2008.
“It was a crucial game for us since we haven’t played the Asia Cup final for 14 years. We got the opportunity tomorrow,” Athapaththu said. “We want to play good cricket because all the media and fans [back home] will be watching.”
The Asia Cup was not just about the big teams from the region, but also Thailand, Malaysia and UAE. Thailand, especially, impressed, beating Malaysia, UAE and Pakistan, in one of the biggest results in their cricket history.
“This tournament is a great opportunity for all of us, especially teams like UAE, Malaysia and Thailand. It was outstanding to watch Thailand play in this tournament,” Harmanpreet said. “This is a platform where you can test your limitations, what type of cricket you want to play in the future.
“We were always testing ourselves, putting ourselves under pressure, to see how we can go about it. We tried a lot of combinations. The World Cup [in South Africa next year] is around the corner. It was a great platform to test, and we are happy with how we used this opportunity.”
Tags: Chamari Athapaththu, Harmanpreet Kaur, India, India Women, SL Women vs IND Women, Sri Lanka, Sri Lanka Women, Women's Asia Cup