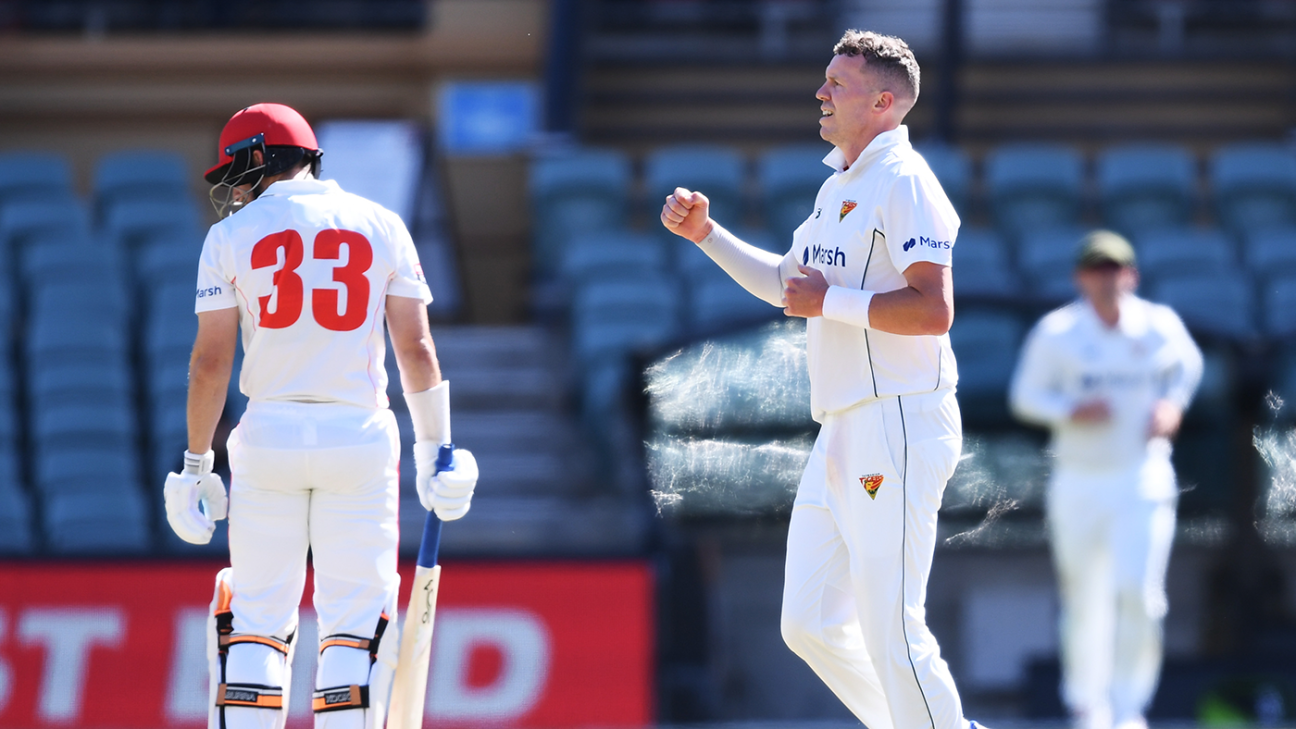 Tasmania 1 for 17 trail South Australia 227 (Lehmann 73, Manenti 59, Bird 4-51, Siddle 4-51) by 210 runs
Jackson Bird and Peter Siddle wound back the clock to help Tasmania run through South Australia for 227 on the first day of their Sheffield Shield match.
After the Redbacks won the toss, Bird claimed South Australia’s first four wickets in the morning session before Siddle cleaned up after lunch, with both bowlers finishing with 4 for 51.
Only Jake Lehmann and debutant Ben Manenti offered any real resistance for the hosts, with the latter attacking Siddle late in his innings.
Manenti’s first day in the Sheffield Shield then reached another high just before stumps, when his a one-handed screamer at second slip allowed Harry Conway to remove Caleb Jewel and leave Tasmania 1 for 17 in reply.
That was a rare highlight for the Redbacks on a tough Sunday at Adelaide Oval. Bird in particular had the ball moving, with the 35-year-old beating openers Henry Hunt and Jake Weatherald off the seam to have them caught behind.
Former Test skipper Tim Paine caught well behind the stumps in his second game back, diving to his left to remove Weatherald when Bird had squared up the left-hander.
Bird claimed Travis Head’s wicket in his next over for five when the left-hander inside-edged a yorker onto his stumps. The former Test quick also trapped Jake Carder lbw for 13, leaving SA struggling at 4-59.
About the only man who looked in against the seamer was Lehmann.  He brought up 50 just before tea when he pulled Bird for four amid three consecutive boundaries, after also taking a liking to Sam Rainbird earlier.
The left-hander eventually fell victim to Siddle, who removed Lehmann and Wes Agar in successive balls in the final session. Siddle also got through Alex Carey’s bat and pad to bowl the Test wicketkeeper on 25, before gaining and edge from Conway to take his fourth victim.
At that stage, it looked as though the Redbacks would likely be all out for less than 200, before Manenti got swinging later and hit Siddle for two powerful sixes over midwicket and mid-on.
The son of Australia’s world champion men’s rugby sevens coach John Manenti, Ben helped the Redbacks put on 35 for the last wicket to give South Australia something to bowl at come Monday.
Tags: Benjamin Manenti, Jackson Bird, Jake Lehmann, Peter Siddle, Sheffield Shield, South Aust vs Tasmania, South Australia, Tasmania